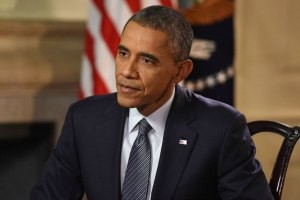 In comments to BuzzFeed News, the president also weighed in on the legal wrangling taking place in Alabama after its chief justice ordered state judges to defy a federal judge's rulings declaring the state's ban on gay marriage unconstitutional.

"My sense is that the Supreme Court is about to make a shift, one that I welcome, which is to recognize that – having hit a critical mass of states that have recognized same-sex marriage – it doesn't make sense for us to now have this patchwork system," Obama said.

"It's time to recognize that under the equal protection clause of the United States [Constitution], same-sex couples should have the same rights as anybody else."

On the attempt to block marriage equality in Alabama, Obama stated that the law was clear.

"[W]e have a supremacy clause in our Constitution," he said. "When federal law is in conflict with state law, federal law wins out."