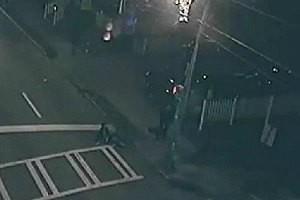 Atlanta, GA - A gay man holding his boyfriend's hand in Midtown Atlanta was suddenly pushed into oncoming traffic in an attack recorded by surveillance video.

According to the GA Voice, the men, who were not identified, had just left Campagnolo, a gay-owned Italian restaurant on Piedmont Avenue, and were walking to Cafe Intermezzo on Peachtree Street. The couple said that a driver in a BMW began honking at them as they crossed 11th Street.

"As we were walking up, a car started following slowly behind us. It was a BMW honking its horn. It was just making us uncomfortable really," the boyfriend of the victim said.

As they waited to cross Juniper Street, a passenger in the BMW jumped out, screamed "faggot" before pushing one of the men into the street.

Video obtained by the Atlanta Police Department shows a car swerving into another lane to avoid hitting the man and nearly colliding with another vehicle.

"I didn't know what happened at that time, all I know is [the victim] is in the street," the boyfriend said. "It all happened so fast."

The couple managed to capture video of the suspect and the car's license plate with a cell phone before he jumped back into the BMW and the driver drove away. The attack occurred in March.

Atlanta police identified the driver but he told them that he did not know the suspect.

"We were told they talked to the guy and they said he doesn't know the passenger, and that he picked the guy up on one block and dropped him off on another," the boyfriend said. "It's crazy to me saying, 'I don't know the passenger in my car who beat up that guy.' It's just crazy. I don't believe it."