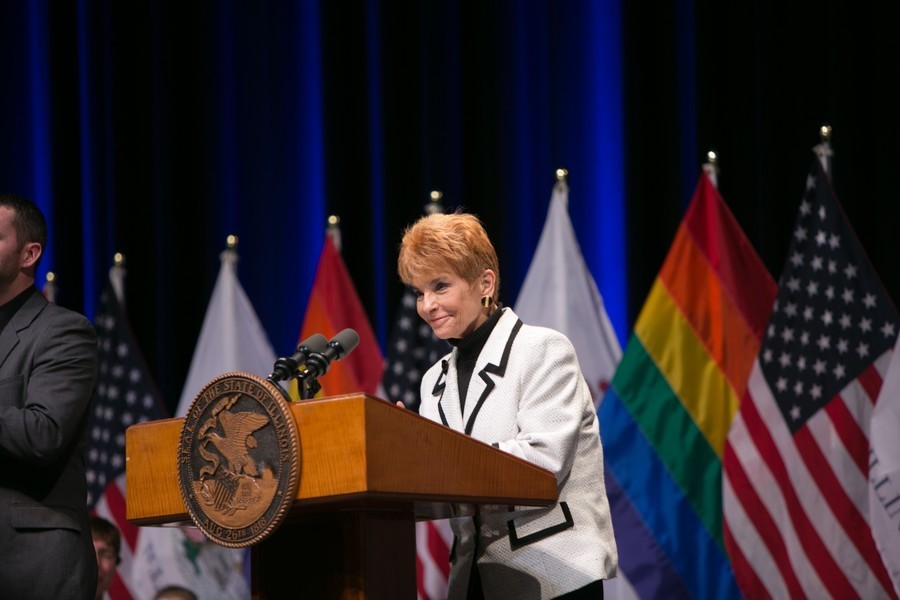 Topinka is being remembered as an independent voice for the Republican Party of Illinois. She was a staunch supporter of gay rights and marriage equality. Topinka spoke at the March on Springfield for March on Equality in October 2013.

Illinois' gay and lesbian community is mourning the death of Ms. Topinka, who was seen as a leader in supporting issues important to LGBT Illinoisans.

Rick Garcia, a gay rights activist for over thirty years, echoed those sentiments.

"Judy Baar Topinka stood out in the Republican party as a consistent and firm supporter of gay rights," said Garcia. "Even when attacked by members of her own party for her gay rights support she never wavered. She was a solid friend and ally."

"Illinois has strong civil rights protections for gay people including marriage rights and Topinka played a pivotal role in that," Garcia added. "During the marriage debate in the House Topinka was on the floor working every Republican member to squeeze out every necessary vote."

Topinka, who has served as the state's comptroller since 2011, won a second term last month in a tough race with Democratic challenger Sheila Simon. Topinka was the first woman to be elected Illinois State Treasurer, a post she held from 1995 to 2007. She began her political career in the Illinois General Assembly in 1980.

"Topinka was old-school Republican - she did not believe in labels she respected everyone and believed in fairness above all. Illinois lost a great leader. May her example be a guide for elected officials from both sides of the aisle," Garcia said. "Her candor, bluntness and common-sense attitude will be sorely missed."

According to the Chicago Tribune, Topinka was taken to MacNeal Hospital in Berwyn on Tuesday morning after feeling discomfort. She was undergoing testing and observation when she lost consciousness early Wednesday. Topinka died shortly after 1 a.m.

Topinka is survived by her son, Joseph.