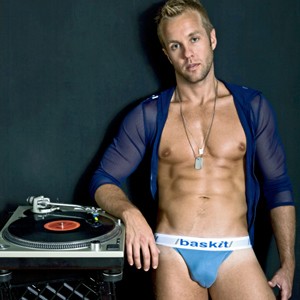 The new resident DJ in town, Scotty Thomson, will be spinning the last Saturday of every month at Chicago's own Hydrate. Hailing from NYC, we thought there'd be no better way to welcome Scotty to the Windy City than to dig up all his dirt and spread it around. So here's the low down on the guy who will soon become your favorite disk jockey.

"I never really wanted to be a DJ." Oooo-kay. Not exactly the turn of phrase you'd expect to hear out of DJ Scotty Thomson, the hot (in more ways than one), rising superstar of the club world. And yet, it's that casual demeanor that has endeared Scott to fans around the globe, those drawn to his lack of pretense, his ear for a solid beat and his respect for melding old school tradition. Yes, he still spins vinyl with modern, cutting-edge sounds.

It wasn't long ago that being a DJ was the farthest thing from this boy's mind. "It was like, Dr. Jekyll and Mr. Hyde," recalls Scott of the split personality he adopted just a few short years ago, when he was trying to balance his demanding, corporate day job with long night shifts as an in-demand DJ at New York City's hottest clubs.
"I'd be at the office in my Gucci suit then suddenly, I was at a nightclub with a Mohawk," laughs Scott. People would say, "Oh, but you seemed like such a nice boy; a preppy boy." In fact, Scott grew up as a competitive sailboat racer and never saw the inside of a nightclub until his carefree college days. Today, and much to the enjoyment of those who join him for a cruise on the dance floor, he continues to flaunt himself in Speedos but only from behind the DJ booth.

"It was like Clark Kent becoming Superman," he adds of the transformation from blue-blood prepster to hot-blooded hunk. "It's funny that I grew up doing championship sailboat racing; I ended up a DJ - from completely conservative surroundings to the complete opposite!" You bet. Faster than a speeding bullet, Scott found his profile rising; from novice, self-trained DJ to resident DJ at Chapel, XL, Limelight and Spirit in NYC, with additional residencies in Chicago, Los Angeles, and Philadelphia, plus a host of international gigs.

"I started off as the guy who always had the huge CD collection," laughs Scott of his humble DJ origins in college. "The bars would close, everyone would be drunk, and they'd say, 'Let's go back to Scotty T's dorm!'" Scott had stocked his collection with a diverse array of House, Electro, Vocal and Tribal sounds. Soon, he traded college dorms for apartment dwelling, though his intent remained the same: to find a space where he could explore his burgeoning love for club culture." I had one requirement for my apartment," remembers Scott of the bachelor pad he still inhabits today. "It needed to have a living room where I could put a DJ booth." So he did and suddenly the guy with the glamorous CD collection was a sought after DJ star. Promoters, who started partying in his living room, were soon recruiting him for headline sets at the most exclusive clubs in the city.

But at the end of the day, Scott refuses to take himself too seriously; and that is the treat that's endeared him to fans around the world. They lust for his body, they yearn for his beats, and they believe wholeheartedly that they've found a savior from the boring, self-important circuit DJs of yore.

"I'm not afraid to take risks," explains Scott. He differentiates himself from other DJs both in content and in approach, mixing on the fly and layering tracks on top of one another. He refuses to constrain himself to strict genre boundaries, and he refuses to give the circuit crowd more of the same. "You don't always have to listen to Beyonce," laughs Scott, "There are other names in dance music, people."

Among his upcoming projects, Scott hopes to team with other young, edgy DJs to bring party people a new dose of options: artists who aren't afraid to provoke, musicians who take chances, and music that can make you move without boring you into the same old routine.

"I'd like to see more exposure to different kinds of music," says Scott, who counts everything from dance-pop favorites (Technotronic's "Pump up the Jam" is a nostalgic favorite) to underground sounds among his preferred selections.

How does he feel about his new home away from home? "Spinning at Hydrate has been a highlight of my career as a DJ thus far," Scotty beams, "The high energy crowd gets me pumped every time and I find myself more and more anxious to return. I love that they eat up my style of mixing true house with commercial remixes and European imports."

Scotty returns to Hydrate Nightclub on Saturday September 27. (Event Details) Be sure to check him out on www.Scottyt.com or www.Myspace.com/djscottythomson.