Jane Byrne, Chicago's first and only female mayor, has died 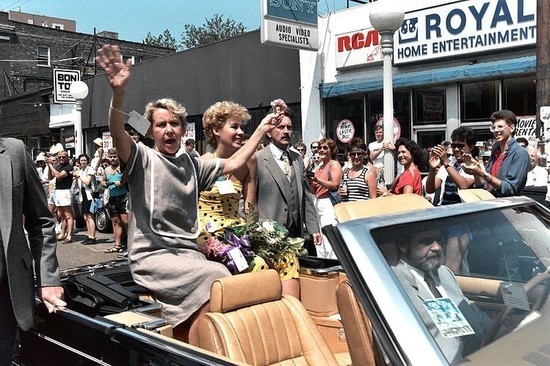 Chicago, IL - Chicago's first and only female mayor Jane Byrne died Friday. She served from 1979 to 1983.

"With the passing of Mayor Jane Byrne, the City of Chicago has lost a great trailblazer," Mayor Rahm Emanuel said in a statement issued Friday.

"Mayor Byrne was a Chicago icon who lived a remarkable life of service to our city. From signing the first ordinance to get handguns off of our streets, to bringing more transparency to the City's budget, to creating the Taste of Chicago, Mayor Byrne leaves a large and lasting legacy. And as the first woman to serve as Mayor, she will always have a special place in our history.

"I was deeply honored that she attended my inauguration, and, in turn, it was my privilege to sign our City's ordinance officially dedicating the plaza surrounding our iconic Water Tower in her honor.

"The thoughts and prayers of the people of Chicago are with her daughter Kathy and her many friends at this difficult time."

As mayor, Byrne declared the first "Gay Pride Parade Day" in 1981. After leaving office in 1983, Byrne became the first high­-profile politician to participate in Chicago's Gay Pride Parade. According to PRIDEChicago, the parade organizers, Byrne also participated in 1984 and 1985.

"The gay community would not be where it's at without Jane Byrne. She was one crazy lady. We loved her for it," 44th Ward Ald. Tom Tunney told ChicagoPride.com. "She has left a lasting legacy on our City and we are grateful for her years of service."

"Mayor Jane Byrne was a pioneer. The first and only woman elected mayor in Chicago, she recognized the LGBT diversity of the city. She set the standard for public officials in the city and the state as the first to publicly build a bridge to the LGBT community."

According to CBS Chicago, Byrne's daughter told family friends her mother died at 10:00 am at her Chicago home.