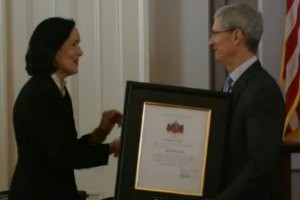 Apple CEO Tim Cook on Monday said that Alabama was moving too slow on LGBT rights.

Cook challenged his home state of Alabama in a speech before his induction into the Alabama Academy of Honor, which honors the accomplishments of living Alabamans.

"Although there has been much progress, our state and our nation still have a long way to go before Dr. King's dream is a reality," Cook said. "As a state we took too long to take steps toward equality, and once we began our progress was too slow. Too slow on equality for African Americans.Too slow on interracial marriage, which was only legalized 14 years ago. And still too slow on equality for the LGBT community. Under the law, citizens of Alabama can still be fired based on their sexual orientation."

"We can't change the past, but we can learn from it, and we can create a different future," he added.

While Cook has neither denied nor confirmed rumors that he's gay, he is a strong supporter of LGBT rights.

Over the summer, two major outlets, CNBC and NPR, repeated the rumor. CNBC's mention on Squawk on the Street led to an awkward moment.