Cardinal George: 'I regret if I've spoken in a way that people weren't able to hear' 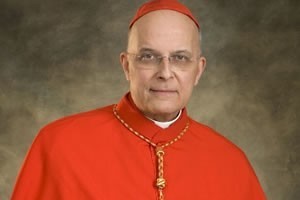 Cardinal George’s ‘legacy will be one of unbridled hate towards LGBTs’, says activist Andy Thayer

Chicago, IL - On Monday, Cardinal Francis George, the head of the Catholic Conference of Illinois and the Archbishop of Chicago, conducted a series of one-on-one interviews before he retires on Nov. 18.

"I regret if I've spoken in a way that people weren't able to hear," Cardinal George told the Chicago Tribune.

"If I'm to be silenced for fear of hurting someone now, what happens to the conversation?" he added. "I'm sorry. I don't want to hurt anybody. But if you say, 'Unless you agree with me I'll be hurt,' well, that's not a just demand. I'm hurt by that."

While acknowledging that he did not effectively communicate his opposition to marriage equality last year, the Cardinal never apologized for his sharp language about Chicago's LGBT community.

In 2011, George compared the LGBT community to the Ku Klux Klan.

The Cardinal later offered an apology for the comparison, yet he remained an ardent and outspoken opponent of Illinois' law allowing gay and lesbian couples to marry.

"The law now holds that men and women are interchangeable in marriage, as if children did not need both a mother and a father to be born and raised with some security. These are laws that mark societies in decline, demographically as well as morally," he wrote in 2013 op-ed.

The Cardinal also referred to same-sex marriage as 'un-natural'.

Andy Thayer, co-founder of the Gay Liberation Network and a frequent protester against Cardinal George, told ChicagoPride.com the 77-year-old Cardinal continues to remain out-of-step, not only with his parisioners, but with the message of Pope Francis, who has said the Catholic Church should be more welcoming to gay Catholics.

"We heard you quite clearly, Cardinal, which is why this state, including most Catholics, rejected your bigoted proscriptions when it enacted equal marriage rights last year," Thayer said. "Your legacy will be one of unbridled hate towards LGBTs. You will be remembered as the Cardinal who through his crude comparisons of gays to fascists, inadvertently paved the way for LGBT legal equality in Illinois."