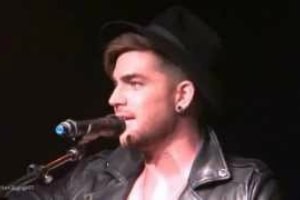 The "Live Proud" campaign, launched in June for the second year, raises awareness for LGBT youth by encouraging participants to share a proud moment on social media.

Lambert was accompanied by an acoustic guitar in a short set that started off with Crazy Little Thing Called Love.

"We all just want love, don't we?It's all about love. Or finding other things in the meantime when you're tying to find love, that's cool too. Love is a tough game."

Primetime.unrealitytv.co.uk reported that Lambert also performed Whataya Want From Me and Outlaws of Love, as well as a mashup of other hits.