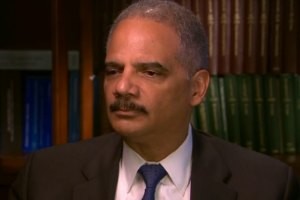 Attorney General Eric Holder has reiterated that the Department of Justice (DOJ) will urge the Supreme Court to strike down state bans on gay marriage.

Justices will hold a closed-door meeting on Monday to discuss petitions from five cases challenging bans in Utah, Oklahoma, Virginia, Indiana and Wisconsin.

Holder, who announced his resignation on Thursday but will remain on the job until his successor takes over, made his comment in an interview with NBC's Pete Williams.

"I expect that the Justice Department will file a brief and the brief will be consistent with the positions that we have taken in the past in support of same-sex marriage. I can't imagine that that would be – that we would take any other position in – while this president is in office, and certainly as long as I am attorney general, or anybody who is my successor," Holder said.

"Is the country ready for that?" Williams asked.

"Yeah, I think the country is ready for that. I think all the polls certainly show that. The reactions to the continuing number of court cases that have found same-sex marriage to be constitutionally mandated – the polls have shown that the American people, I think, are prepared to accept that. Now this has been a sea change. This is something that has happened, I think, relatively quickly. Part of it is generational. I talk to my kids, who seem, no problems with this, no issues with this at all.But I think it's more than a generational change. I think that people who know folks who are gay, who are lesbian, and who are their friends, their coworkers, they see the moral side to this. It's a civil-rights issue. From my perspective, it is the civil-rights issue of our day – gay and lesbian equality."

Appearing on ABC's This Week in July, Holder said he believes such bans "will not survive a heightened scrutiny examination" and that the DOJ will file documents with the Supreme Court that "will be in support of same-sex marriage."