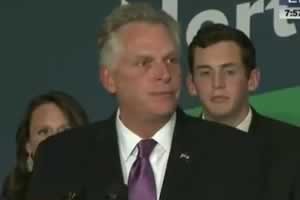 Virginia Governor Terry McAuliffe, a Democrat, on Wednesday predicted that the Supreme Court would strike down gay marriage bans.

Speaking at a Human Rights Campaign (HRC) fundraiser in the District of Columbia, McAuliffe sounded confident that gay and lesbian couples will soon be able to legally marry in Virginia.

"I want you all to know that in the commonwealth of Virginia we are going to have marriage equality," McAuliffe told the crowd. "As governor, I am going to preside over marriage equality and I promise you that."

"With the Supreme Court, we are going to make this done for you," he added.

The Supreme Court has agreed to consider petitions for review in cases challenging bans in Utah, Oklahoma, Virginia, Indiana and Wisconsin. Justices will consider the petitions at a closed-door meeting next week and are under no obligation to hear any of the cases and could decide to delay their decision.

HRC President Chad Griffin is quoted by the Washington Blade describing McAuliffe as "a bold ally" and "a great champion of equality."