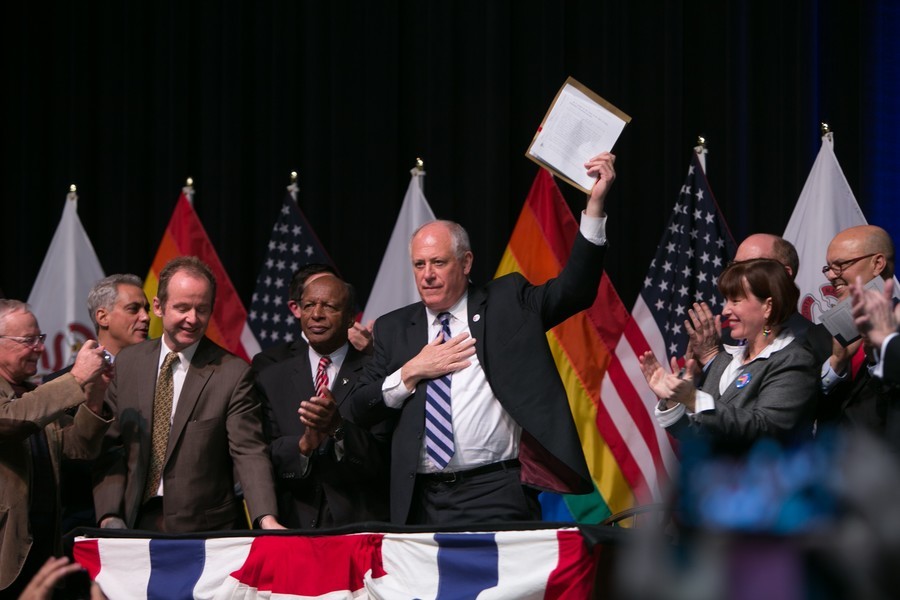 Governor Quinn's leading role in achieving first civil unions and then marriages for same-sex couples, his open and inclusive administration, and his strong support for policies that protect LGBT students from bullying and LGBT workers from discrimination make Governor Quinn the choice of Equality Illinois PAC, the only statewide PAC focused on LGBT issues. Equality Illinois PAC is backing up the endorsement with an aggressive get-out-the-vote effort.

"Governor Quinn has stood up time and again on issues important to LGBT Illinoisans and their families, from marriage to health care to anti-bullying laws. Governor Quinn is the only gubernatorial contender who unequivocally supports LGBT equality and he deserves the unequivocal support from all voters who support equal treatment for LGBT Illinoisans," said Bernard Cherkasov, CEO of Equality Illinois, the state's oldest, largest, and most respected LGBT advocacy organization.

"As for Gov. Quinn's opponent, Bruce Rauner, we, like most Illinoisans, are alarmed that he blurs the line by saying anything in order to win this election; and with all the gains made during Gov. Quinn's time in office, Illinois cannot risk going backwards on LGBT rights. Bruce Rauner is a dangerous purveyor of empty, mealy-mouthed rhetoric, on the rare occasions he has anything to say about these issues," said Nicole Bashor, Chair of Equality Illinois PAC.

After the primary elections, Equality Illinois had reached out to Bruce Rauner on numerous occasions in the hopes of helping develop a platform that does not exclude or marginalize LGBT Illinoisans. But we were discouraged that he shunned every overture, even failing to return a candidate survey on issues important to the LGBT community.

"Bruce Rauner's refusal to support something so accepted as marriage rights for gay and lesbian couples reinforces all doubts that he would aggressively enforce laws against hate crimes and bullying. In fact, Bruce Rauner's failure to give a straight-forward answer on marriage equality continues the climate of second-class treatment for LGBT Illinoisans and their families," Bashor said.

Our community and our allies fought for laws that provide equal protections for LGBT Illinoisans for too long to risk it all now with Bruce Rauner. And the state doesn't have to because it has a stand-up leader for LGBT Illinoisans and their families and allies in Gov. Pat Quinn.