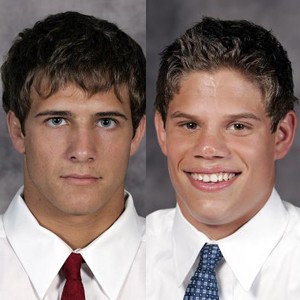 A blogger for The Scarlet Project reports that Paul Donahoe, a national champion in the 125-pound division, and Kenny Jordan, who wrestles in the 133-pound division, were found by an anonymous source on the Los Angeles-based gay adult website Fratmen.tv. The two did not appear in photos together.

According to the blog, Donahoe, 22, is a senior from Davison, Michigan and has been a stand-out on the Husker wrestling team. He won the 2007 NCAA national championship at 125 pounds and was a third-place finisher this past March.

Nebraska officials say the two wrestlers are under investigation.

"We are aware of the matter and it is being reviewed internally. We will have no further comment until all of the facts of the situation are known," NU head wrestling coach Mark Manning said in a released statement.

It is unknown if NCAA violations may have occurred.

The The Scarlet Project also reported Donahoe was arrested in April, 2008 after becoming "argumentative" and refused to break up a party being held at his residence on Claremont Street in Lincoln. Lincoln Police took Donahoe into custody and charged him with maintaining a disorderly house. His blood alcohol level tested at .122.

According to QueerClick.com, Donahoe and Jordan appeared as "Nash" and "Cal" on Fratmen.tv.