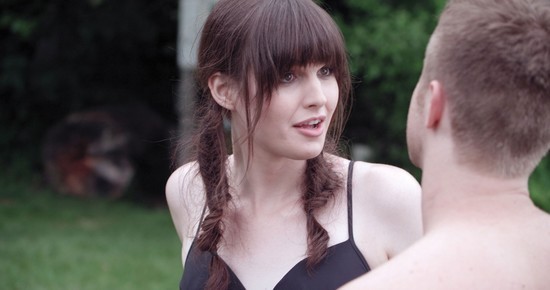 This year's festival selections run the gamut from edgy to adorable, raunchy to contemplative, disturbing to endearing, and heartbreaking to heartwarming. A bevy of special guests, filmmaker Q&A's, and parties are also slated as part of this year's line-up.

The eight-day festival returns to the Music Box Theatre, 3733 N. Southport Ave., for its Opening Night Reception on Thursday, Sept. 18, and then moves on to its main venue, Landmark's Century Centre Cinema, 2828 N. Clark, from Sept. 19 to 25. The fest's home base, Chicago Filmmakers, 5243 N. Clark, will also host select screenings.

Eric Schaeffer's BOY MEETS GIRL opens the festival on Sept. 18. Transgender actress Michelle Hendley shines in her debut in this romantic comedy that poignantly explores the difficulty of growing up in a small town, following your dreams, finding love, finding yourself, and figuring out your sexuality.

Centerpiece Screenings round out Reeling's featured spots and include TOM AT THE FARM, a disturbing thriller by enfant terrible Xavier Dolan (I KILLED MY MOTHER) as the International Centerpiece; LILTING, starring Ben Whishaw (SKYFALL, CLOUD ATLAS) as a grieving man trying to reach out to his deceased lover's mother, who hadn't known her son was gay, showing as the Gay Centerpiece; ANATOMY OF A LOVE SEEN, directed by the producer of the popular lesbian feature ELENA UNDONE, is the Lesbian Centerpiece; and DRUNKTOWN'S FINEST, Executive Produced by Robert Redford and winner of the jury award for Best US Dramatic Feature Film at this year's Outfest, is our Trans Centerpiece.

Other feature highlights in the festival include the World Premiere of SAUGATUCK CURES, a heartwarming comedy starring Max Adler from GLEE; Sundance selection APPROPRIATE BEHAVIOR, an incisive satire of Brooklyn twenty-somethings and a lesbian send-up to Annie Hall, written, directed, and starring Desiree Akhavan; Bruce La Bruce's GERONTOPHILIA, a quirky "Thelma and Louise" meets "Harold and Maude" drama about a young man who forms a romantic attachment to an elderly man in his care in a nursing home; CRAZY BITCHES, a wacky comedy/horror feature by Jane Clark, starring Guinevere Turner (THE L WORD), Cathy DeBuono (AND THEN CAME LOLA) and Candis Cayne (DIRTY SEXY MONEY); CUPCAKES, an Israeli musical directed by Eytan Fox (THE BUBBLE, YOSSI & JAGGER) and scored by Babbydaddy from the Scissor Sisters; EAT WITH ME, written and directed by David Au, a former Chicagoan, featuring a cameo by George Takei (STAR TREK); THE FOXY MERKINS, a hysterical absurdist parody of gay hustler films by Madeleine Olnek; and J.C. Calciano's THE 10 YEAR PLAN, a romantic comedy about two friends who make a pact not to end up alone and realize 10 years later that the last thing they want is to end up with each other.

Also screening are WAITING IN THE WINGS: THE MUSICAL, a goofy homage to Broadway; BFFs, a satire of New Age relationship seminars; BOYS, a beautifully told Dutch coming-of-age film set in the bucolic countryside; THE DAVID DANCE, about a talk-show radio host struggling with self- doubt when his sister asks him to be the father figure for her soon-to-be adopted Brazilian child; ENTRE RIOS, EVERYTHING WE LEFT UNSAID, an Argentinian film about a young man grappling with whether or not he should come out to his dying grandmother; EVER, a tender contemplative drama about a young woman coping with the death of her boyfriend; German director Monika Treut's OF GIRLS AND HORSES, about a rebellious misfit sent by her exasperated mother to spend the summer working in a stable; TIGER ORANGE, about two estranged gay brothers trying to reconnect after the death of their father; and WHAT IT WAS, a lyrical film about the reuniting of two former lovers, set in New York City.

Other documentaries include AGE OF CONSENT, the story of Hoist, London's first and only male fetish bar and sex club; ALEC MAPA: BABY DADDY, the comic and actor's (UGLY BETTY) award-winning one-man show; GAMING IN COLOR, which tracks the emergence of queer themes in video games; the Austrian film MAX AND THE OTHERS about the life of a former lieutenant colonel who keeps an orderly playroom; ONE: A STORY OF LOVE AND EQUALITY, in which the filmmaker seeks to put a human face on those who hold opposite views on the gay marriage debate; POWER EROTIC, an exploration of power and dominance in gay sexuality; QUEERS IN THE KINGDOM, about LGBTQ alumni who decide to make themselves visible on Christian college campuses; SKANKS, which follows a community theater in Alabama and its attempt to produce an original drag musical; SONGS FOR ALEXIS, which chronicles the ups and downs of a transgender teenage folksinger; and VICKY: THE GAY GENE COMES TO AUSTRALIA, about a gay bishop trying to undo the harm that religious people have done to the gay community.

The complete festival line-up is posted on ChicagoPride.com's Community Calendar.

For more information, the public can call ( 773 ) 293-1447, consult the festival website at www.reelingfilmfestival.org, or follow "@reelingfilmfest" on twitter for the latest Reeling news and ticket promotions.

Tickets may be purchased online at www.reelingfilmfestival.org or in person at Chicago Filmmakers, 5243 N. Clark, beginning Aug. 25.