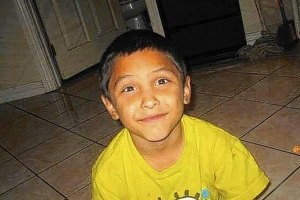 Los Angeles, CA - A Los Angeles mother and her boyfriend allegedly beat to death her 8-year-old son whom they called gay.

According to The Los Angeles Times, Pearl Fernandez, 30, and her boyfriend, Isauro Aguirre, 34, have pleaded not guilty to charges of capital murder and a special circumstance of torture.

On May 22, 2013, Fernandez called 911 to report that her son, Gabriel Fernandez, was not breathing.Authorities found the boy naked in a bedroom, his skull cracked, three ribs broken and BB pellets embedded in his lung and groin. He died from his injuries two days later.

James Cermak, a Los Angeles County Fire Department paramedic, testified that "it was just like every inch of" Gabriel's body had been abused.

According to testimony from two of his siblings, Gabriel was forced to eat cat feces, rotten spinach and his own vomit. Fernandez and Aguirre, they said, called Gabriel gay and he was punished for playing with dolls.

Fernandez and Aguirre are in jail awaiting trial.