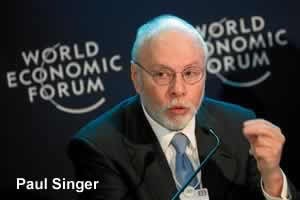 According to USA Today, the group has committed to back 7 congressional candidates, including Representatives Charlie Dent of Pennsylvania and Richard Hanna of New York and Richard Tisei, an openly gay Republican candidate vying to represent Massachusetts in the House.

"For many years, there's been a huge fear from Republican elected officials that if they showed courage on issue like this, would they be able to survive politically?" said Jeff Cook-McCormac, a spokesman for the group. "What American Unity PAC is committed to doing is ensuring that as these courageous elected officials follow their conscience and do the right thing, that there is a political network in place that's there to defend them."

Singer, who is straight but has a gay son who married his husband in Massachusetts, the first state to legalize gay nuptials, is considered among the most important Republican donors nationwide. He has given nearly $10 million of his own money toward efforts to legalize such unions in New York, New Hampshire and New Jersey.