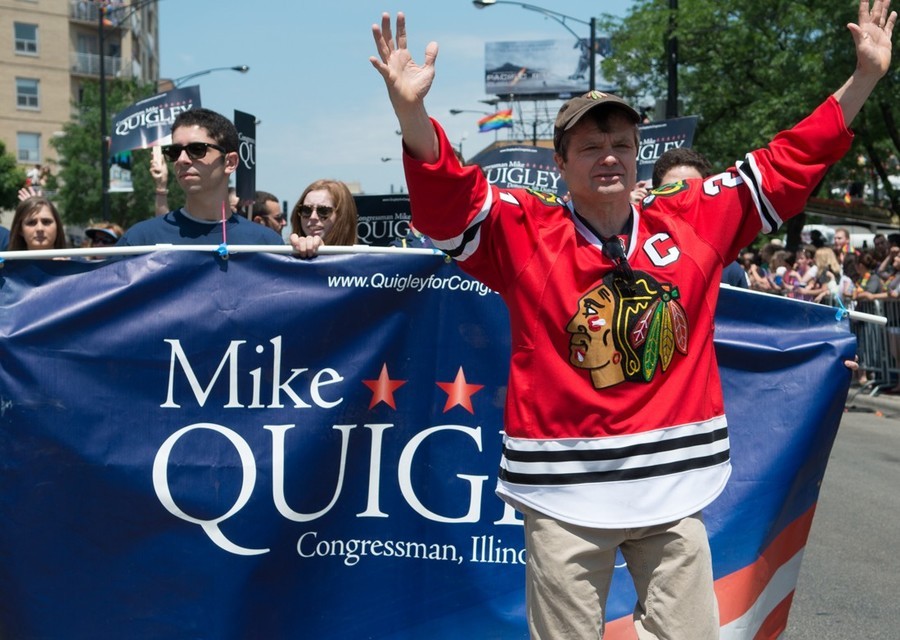 The Lakeview congressman has long been an advocate for LGBT issues, enough to walk 2013’s annual Pride Parade with crutches.

Chicago, IL - The defining list of characteristics for U.S. Representative Mike Quigley (IL-05) may include his unwavering love the Chicago Blackhawks and a "Most YOLO Congressman" status on Buzzfeed, but when it comes to the LGBT community, Quigley's support is undeniable.

The Lakeview congressman has long been vocal about LGBT rights, taking on major issues like marriage equality, the Employee Non-Discrimination Act (ENDA) and the gay blood ban. But the story behind what makes him so supportive has deep roots in the Lakeview community.

"A person told me a long time ago that familiarity breeds acceptance, and then comes hardcore acceptance and mutual love," Quigley told ChicagoPride.com. "I moved to Lakeview after growing up in the suburbs, and it was a process of meeting and working with people in this community, and developing close friendships. So then, when someone opposed a human rights ordinance, it wasn't just an issue of equality. These people were messing with my friends."

And Quigley plans to join his friends in Lakeview once again for the 45th annual Chicago Pride Parade on Sunday. He's been marching in the parade for more than three decades, even in 2013 when a hockey game against Washington D.C. lobbyists caused him to tear a hamstring.

The congressman was facing surgery, but still walked the entire parade route.

"My first parade was in 1982, and I haven't missed one since," he said. "Last year I walked the entire thing on crutches. And do you know what kept me going? People are so damn nice there, and constantly cheering. I was supposed to get in a car and ride, but it's very contagious."

And this year, the support during the annual Pride Parade should be monumental, piggybacking on a year of accomplishments HRC calls the most substantial in the LGBT movement's history. Illinois passed marriage equality, the Senate passed the Employee Non-Discrimination Act (ENDA) and much more.

But according to Quigley, there is still plenty to be done to ensure equality.

"I always think of Pride as the start of a new year. You look back on the past year's accomplishments like passing the marriage equality act. But I always say, don't let the highs get you too high and relaxed, and don't let the lows get you down and too frustrated. I've been doing this since '81, and you have to stay the course. The LGBT community is still where I see the horizon, where there's so much that can still be accomplished."

Quigley is also the only Illinois politician to serve on the House Committee on Appropriations, which is responsible for approving the federal government's spending levels for nearly all federal programs. It's there that he hopes to make a difference for the LGBT community, like last year when he helped increase funding for housing opportunities for those with AIDS, and when he helped secure $500,000 for the Center on Halsted.

That's combined with his work on ENDA. Although it passed the Senate, Quigley says it will be tough to get on the floor of the Republican-controlled House of Representatives. Plus, the congressman has been a strong supporter of eliminating the ban on men who have sex with men (MSM) donating blood.

"The blood ban has opportunities to move forward," Quigley explained. "We started this over four years ago with former Senator Kerry, and now my partners Sen. Baldwin and Sen. Warren are doing a great job. [Health and Human Services] and the FDA say the research should be done in 2014, so I want to say we're going to have a victory in this 'Pride year,' by the next Pride Parade."

The more than 1 million people attending Sunday's Pride Parade in Chicago can expect to see Quigley, per usual, making his march down the route, likely in adorned in Blackhawks gear.

"I'm reminded every time I do it that the victories are great, but there's a lot more to do," he said. "I may be dancing in the raindrops on Sunday, but I'll be there."