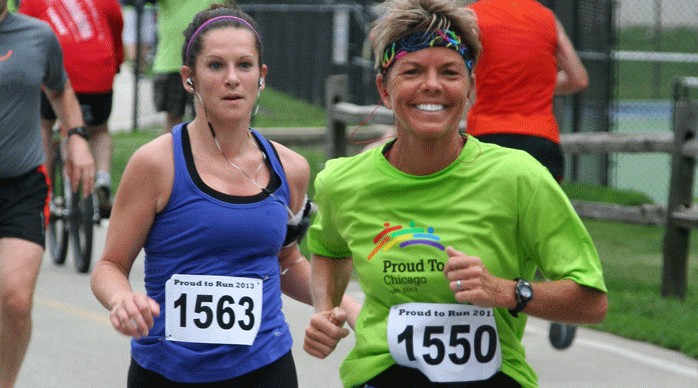 PTR originated in June 20 1982, when members from the Chicago Metropolitan Sports Association (CMSA) organized the first 10K run and one mile walk for participants to celebrate LGBT pride and financially benefit the community.

"The event is family and ally oriented and we are the cheapest 5K in Chicago," PTR Organizer Gary Brown told ChicagoPride.com. "We want it to be affordable so everyone can participate in it."

All proceeds from the race will go to LGBT beneficiaries such as; About Face Theatre, Test Positive Aware Network and The Night Ministry.

"Proud to Run is a fun road race that brings together all orientations from across Chicago and beyond to help local charities doing important work in our city," said PTR organization member Justin Koziatek. "Showing our Pride in a way that promotes health and well-being is a good alternative to the other events that happen during the Pride weeks."

This year's Proud to Run race features new logos and t-shirts along with custom-made medals which will be given to the finalists of the race.

State Reps. Greg Harris and Kelly Cassidy will be present at the event. Both lawmakers were instrumental in the passage of Illinois' marriage equality bill in November.

"We are estimated to receive another couple hundred racers with 1800, with 200 volunteers," Brown said. "We have raised over $350,000 overall with these races, so we really appreciate the turnout of everyone getting involved with taking part in the race and volunteering."

The PTR organization is made up of a 15 member volunteer board, represented by Chicago's LGBT community running & walking club, "Frontrunners & Frontwalkers."

"Everyone involved on the board and committees volunteer their time and put their strengths and talents together to make this event bigger and better each year," Koziatek said. "It's hard not to feel proud to be a part of this."

The race steps off at 8:04 a.m. on Saturday, June 28. The race site is just north of Montrose Harbor. Both the 5K and 10K courses start on Simmonds Drive north of Montrose Avenue, approximately three blocks east of Lake Shore Drive.

Additional race information can be found at the Proud to Run website at proudtorun.org.