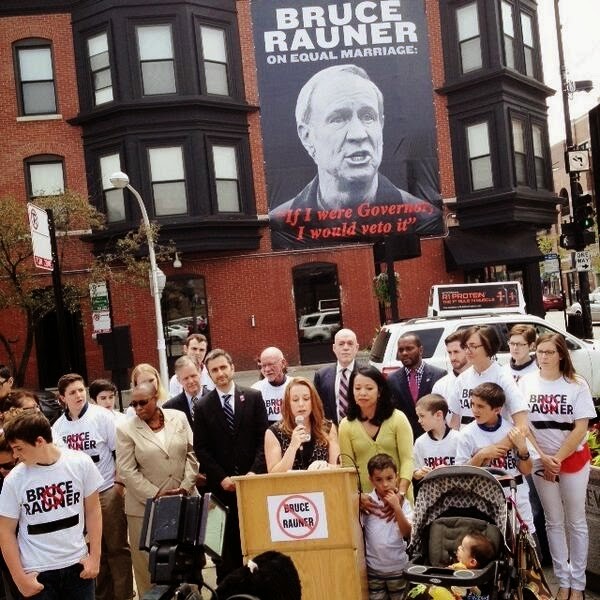 Chicago, IL - As the 45th annual Chicago Pride Parade steps off Sunday on Chicago's North Side, Republican gubernatorial candidate Bruce Rauner will have a dubious presence at the LGBT Pride celebration thanks to a giant banner that went up at the corner of Roscoe and Halsted.

Gay rights advocates, activists and politicians gathered Thursday in Lakeview to blast Rauner's stance on same-sex marriage and to unveil a two-story banner that says, "Bruce Rauner on marriage equality: If I were governor, I would veto it."

The statement is taken from a Nov. 5 Tea Party event where Rauner was the keynote speaker. When asked whether he would sign the legislation if he were Governor, Rauner replied, "If I were Governor, I would veto it."

Earlier this month, Rauner said that Illinois voters should have decided whether same-sex marriage should be legal in the state, but now that it's the law he won't advocate changing it.

On Thursday, Art Johnston, co-founder of Equality Illinois, called Rauner, "an enemy of equality" adding that the parade was as an opportunity to "educate the public about the real Bruce Rauner."

Rauner, a Winnetka businessman, is challenging Democratic Gov. Pat Quinn for governor. Quinn pressed for the marriage equality bill and signed it into law on Nov. 20.

Quinn will march in the parade on Sunday. Rauner will not attend due to what a spokesman called a scheduling conflict.