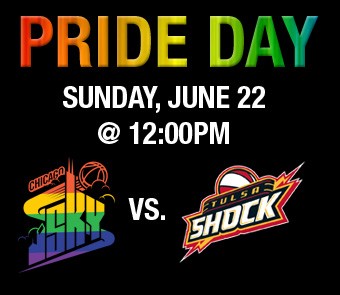 The WNBA became the first professional sports league to establish an integrated marketing, media, grassroots and social responsibility program for the LGBT community when it tipped off WNBA Pride presented by COVERGIRL in May.

"The WNBA welcomes all fans, athletes, and partners to our game," said WNBA President Laurel J. Richie. "These beliefs unite the 12 teams of the WNBA and we are very excited to introduce the WNBA Pride platform which celebrates acceptance and inclusion. The WNBA takes great pride in working with extraordinary partners who share these values, and we are so grateful to our presenting partner COVERGIRL along with ESPN, GLSEN and GLAAD for joining the WNBA on this important initiative."

After the game, the Sky will host a networking event and panel discussion featuring Athlete Ally Founder and Executive Director Hudson Taylor, former Stanford guard Toni Kokenis, ESPN.com national baseball editor Christina Kahrl and Sky forward Jessica Breland. The panel will discuss, among other things, why LGBT respect and inclusion in sports is important, the obstacles that prevent athletes from feeling comfortable and tips for how panel attendees can make their athletic communities more inclusive.

Richie will be in attendance for this historic game and fans are invited to watch on ESPN 2 or attend the game. Tickets are available by calling 866.SKY.WNBA or online.