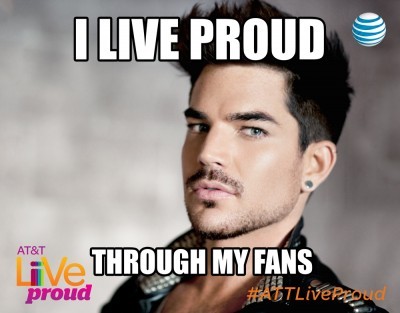 Adam Lambert teams up with AT&T for 'Live Proud' campaign

Openly gay singer Adam Lambert teamed up with AT&T for the second year in a row to promote the 'Live Proud' campaign, which raises awareness, empowerment, and pride for the LGBT community.

"Today, too many LGBT individuals don't feel they have a voice, and this program gives them one," Lambert said in a June 5 announcement. "For me, I choose to 'Live Proud' through my fans and my music. By creating personal and empowering music that my fans can relate to, I aim to inspire and motivate them every day."

The "Live Proud" campaign encourages participants to create and share on social media (tagging should include #ATTLiveProud) unique memes that represent how they "live proud." One lucky winner will be selected to meet Lambert at a private event in New York City.

Lambert recently participated in a June 14 Google Hangout to discuss the campaign. The Hangout included questions – asked by panelists and Adam's fans – about the AT&T "Live Proud" campaign, his highly-anticipated summer tour with Queen, which kicked-off this week in Chicago, and other LGBT topics.

Representatives from AT&T will be at Chicago Pride Fest (booth 98), Sat. June 21 and Sun. June 22, to share more about the company's commitment to supporting LGBT non-profit groups, including the Trevor Project.

AT&T is among a number of corporations getting in the Pride spirit.

Chicago Pride Fest, which is organized by the Northalsted Business Alliance, runs June 21-22 on Halsted Street between Addison and Grace. A $10 donation is recommended. The Chicago Pride Parade is the following Sunday, June 29 at noon.