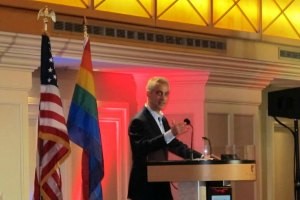 Chicago, IL - Illinois Governor Pat Quinn and Chicago Mayor Rahm Emanuel were among the leaders honored Sunday for their work on a gay marriage law.

"It is finally true in Illinois, there is no longer straight marriage or gay marriage. There is only marriage in the eyes of the law," Emanuel told the crowd of roughly 220 people who had gathered in the JW Marriott's Burnham Ballroom in downtown Chicago.

"If I wasn't there to sign the bill ... we wouldn't be here today," Quinn said, a possible dig at his Republican rival Bruce Rauner, who has suggested he would back repeal of the marriage law. "That is a lesson to all of us that getting involved in election campaigns and politics and democracy is indispensable."