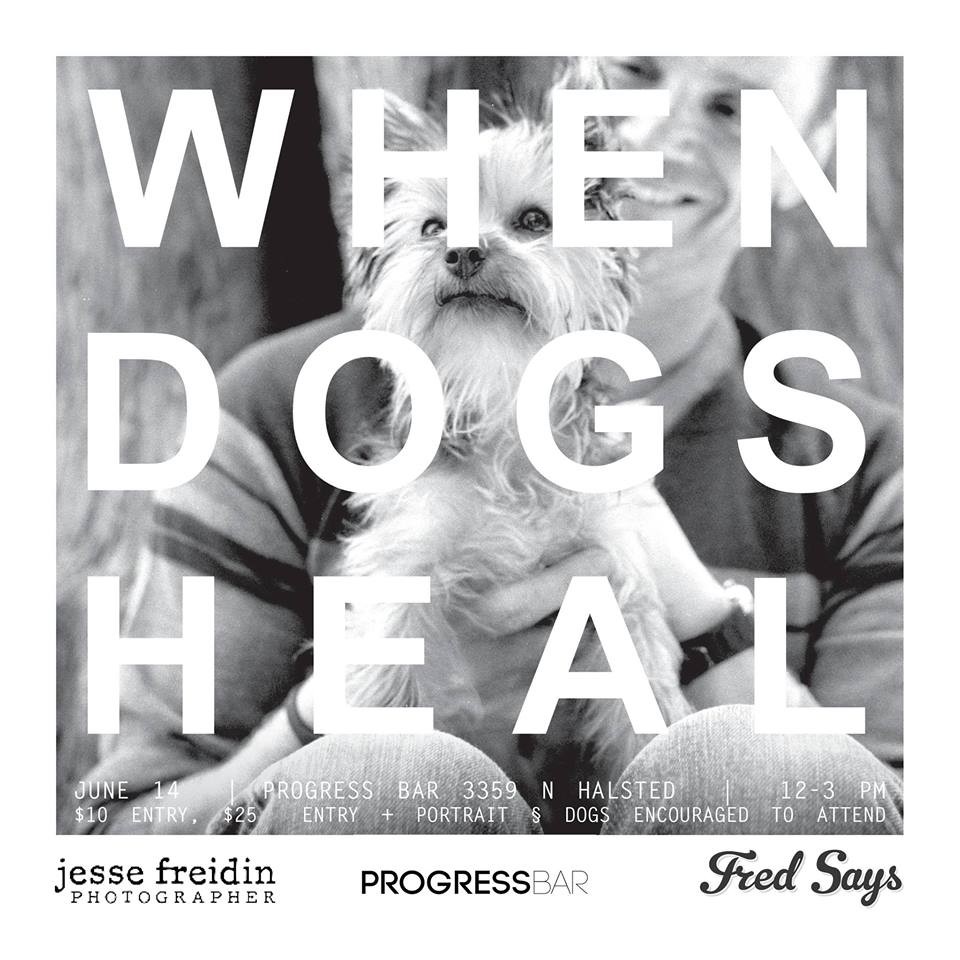 Chicago, IL - It's frequently said that dog is a man's best friend -- Saturday, June 14, Fred Says is celebrating that special bond with "When Dogs Heal," an event at Progress Bar for pooches and their owners that seeks to highlight the "incredible role dogs play in helping their owners heal from emotional and physical ailments." Award-winning pet photographer Jesse Freidin will be present to take photo booth-style pictures of attendees with their dogs as part of a larger project to compile a book depicting the "profound healing effect" dogs can have on humans.

"The book is sort of the end goal, the hope driving this project...we plan on traveling to major cities over the next two years taking photos of HIV+ people and their pets, and eventually turning that into a book that would be sold to support HIV+ teens and the services that serve them in certain cities," Zach Stafford, a Behavioral Research Associate at Ann & Robert H. Lurie Children's Hospital of Chicago who also sits on the board of Fred Says, told ChicagoPride.com. "The book also hopes to have young people in it as well, but will be comprised of people from all walks of life."

The Chicago-based nonprofit that works to raise money and provide support for HIV+ teens was looking for its next big creative project after last year's very successful Men of Fred Calendar fundraiser. Inspiration struck in the form of a hangout session with Freidin in his Los Angeles studio while exploring his latest book "When Good Dogs Do Bad Things."

"For us, it was a 'duh' moment because it is going right back to our roots as an organization and showing that Rob's story is not just his, but so similar to so many others who have their own dogs like Fred out there," Stafford said. "It's estimated that over 100,000 HIV+ people in America have a pet, so there is even data backing that."

Fred Says was founded in 2011 by Dr. Rob Garofalo, Director of the Lurie Children's Hospital's Gender, Sexuality and HIV Prevention Center and Medical Director of the Adolescent/Young Adult HIV Program after he adopted a tiny Yorkshire Terrier. The furry bundle of cuteness, named Fred, brought peace and joy back to Garofalo's life during a dark time when he was struggling with a host of personal, professional and health problems, including a cancer diagnosis and his own status as an HIV+ individual.

Since last year's Men of Fred event, the group has been focusing a lot on national efforts and finding new organizations in NYC, Los Angeles and hopefully Boston that they plan to donate to at the end of 2014. They've also been working locally with TPAN and focusing on their Ride for AIDS team, which currently has over 50 riders signed up and is expected to raise more money than the group has ever collected before. Saturday's "When Dogs Heal" event is a chance for them to flex their creative muscles and get back to the very root of Fred Says -- the pooch and the bond he created that helped save Garofalo.

"Pets have an incredible ability to heal on not only a physical but also a mental/emotional level," Dr. Natalie Marks, 2012's "Veterinarian of the Year" and one of the owners of Lakeview's Blum Animal Hospital, said in a press release for the event. "It is well documented that petting a dog or cat can significantly lower blood pressure, heart rate and cortisol (stress hormone) levels...The strength of the human-animal bond is almost beyond description and companion animals should be part of the healing process for many chronic illnesses."

"When Dogs Heal" is a Saturday Funday type event and will feature cocktails, brunch food and music. Pets are, of course, encouraged, and the back area of Progress Bar will be reserved for portrait-taking by Freidin. The session is for anybody that wants their picture taken with their dog and isn't exclusively for HIV+ folks. The next day, Freidin will be holding a closed-studio session for HIV+ folk who have volunteered to part of the larger photo project. Anyone interested in participating in the closed-studio session should contact zstafford@luriechildrens.org.

Saturday's event is slotted for noon to 3 p.m., with a suggested $15 donation to attend, or $25 to have your and your dog's portrait taken by Freidin. For more information, RSVP to their Facebook event.