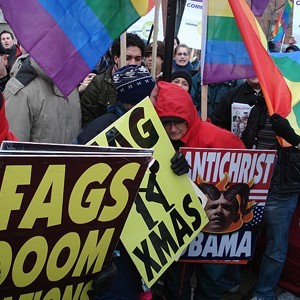 In response to an article about the two-day street festival published by On Top Magazine, a content partner of ChicagoPride.com, the Topeka-based hate church tweeted: "@LGBTNewsNow @OnTopMag @WGNNews Westboro Baptist Church to picket @PrideFestChi! #SoExcited."

The controversial church is made up mostly of the immediate family of the late Fred Phelps Sr., who passed away March 19, 2014. Before his death, the 84-year-old anti-gay leader was excommunicated from the church he started. It remains unclear who now heads Westboro Baptist Church.

The Phelps' clan has a history of failed protests in Chicago.

In 2008, an attempt by Westboro Baptist Church to protest outside the Center on Halsted, Chicago's LGBT community center, was halted when more than 100 people outnumbered the 5 church members and effectively blocked their anti-gay message.

In it's first protest since the passing of Phelps Sr., several Westboro Baptist Church members attempted a protest outside Lorde's March 21 concert in Kansas City, Missouri.

Westboro Baptist Church gained national attention when they protested at the funeral of Matthew Shepard. The church, which is not affiliated with a larger denomination, is monitored by the Anti-Defamation League and is classified as a hate group by the Southern Poverty Law Center.