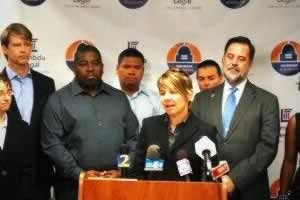 The lawsuit was announced at a press conference organized by Lambda Legal in Atlanta.

The Georgia Supreme Court in 2006 ruled valid the 2004 public vote which amended the Georgia Constitution to recognize only the union of a man and a woman as marriage and prohibit the state from recognizing the legal marriages of gay couples.

Christopher Inniss, 39, and Shelton Stroman, 42, of Snellville, an Atlanta suburb, are the lead plaintiffs in the case. The men have been together 13 years and are raising their 9-year-old adopted son, Jonathan.

"We just want to make sure that other families like ours are treated just like everyone else's family," Stroman told the AP. "It's really hurtful and offensive that the state of Georgia is refusing to treat our families fairly."