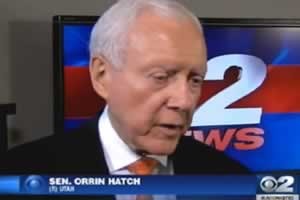 Hatch, a Republican and a member of the Mormon Church, created a firestorm of criticism in 2010 when he called on Republicans to emulate the tactics of gay rights activists in supporting Democratic candidates.

Last year, the 80-year-old Hatch said if the Supreme Court rules in favor of allowing gay couples to marry, "it opens a plethora of problems that the court will be forever trying to decide."

Still, he has endorsed civil unions for gay couples.

Civil unions "could solve this problem without undermining the very basis of marital law in our country."

On Thursday, Hatch told Salt Lake City CBS affiliate KUTV that "many feel that once it gets to the Supreme Court, they'll find an equal protection or due process situation that would allow gay marriage in every state."

"Well, I'm hoping that the 10th Circuit Court of Appeals will decide that the states have a right to decide their version of marriage," he added, a reference to a Utah appeal to uphold the state's ban.