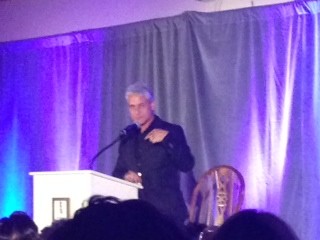 Executive Director David M. Roseler introduced Louganis after screening a video in which the HIV/AIDS clinic's clients, staff and others urged attendees to donate further to the clinic's cause.

"Imagine winning five Olympic medals, five World Championship titles and 47 national titles in diving, then being on the world stage and announcing you are gay and HIV positive," lauded Roseler.

In February 1995, Louganis announced that he is gay and HIV positive. On Saturday night he shared more of his story and what it means to be gay and living with HIV/AIDS.

Louganis explained he got involved with the dinner through his friendship with Jeanne White-Ginder, mother of Ryan White, a child AIDS victim who died in 1990. Through White-Ginder's efforts, the U.S. Congress funded numerous Ryan White namesake funding programs, also known as ADAP, which are collectively the largest providers of services for persons living with HIV/AIDS in the nation according to Wikipedia.

White-Ginder was among those who spoke on the video screened before Louganis spoke to the crowd.

Louganis described for the crowd becoming involved with and giving many of his Olympic medals to a young Ryan White after hearing of his condition, retold the story of his infamous diving board accident at the 1988 Olympic games in Seoul, South Korea, recalled being followed by associates of the late Fred Phelps of the anti-gay Westboro Baptist Church and explained why he thought the idea of a boycott of the 2014 Sochi Winter Olympic Games in response to Russian Prime Minister Vladimir Putin's anti-gay propaganda policies was ill-advised.

"My feeling is Olympic boycotts hurt the athletes," said Louganis.

"My experience in Russia at the LGBT Open Games was different – participants were turned away. There was a bomb threat. We created our own smaller events in secret. That was the real Russia."

Louganis concluded by explaining why programs like Open Door and their clients are still important.

"We've come a long way, it's important that we be seen...Your backyard, that's where we can really make a difference," he said, referring to local programs such as Open Door, which serves Kane and the surrounding counties.

Roseler reminded guests that the clinic is moving to a new location and with government cost-cutbacks and a "changing healthcare landscape due to the Affordable Care Act (Obamacare)," the clinic will need support to continue to service its some 600 clients.

"Open Door [is making] serious changes. We don't want anyone else taking care of our clients," said Roseler.

"We are moving through the Affordable Care Act to provide a pathway for the at-risk and disenfranchised to receive quality care."

Roseler said the non-profit clinic is investing in the future by purchasing a facility in Elgin by May and an electronic records system, and hiring a new medical director.

Open Door has been in operation since 1977 and has two locations in Elgin and Aurora.