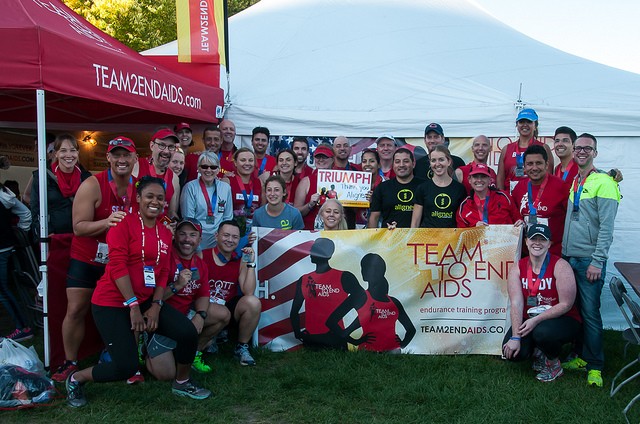 Chicago, IL - The Oct. 12 Bank of America Chicago Marathon will be handling its charity functions a bit differently in 2014, aiming to be more inclusive with charities such as the AIDS Foundation of Chicago (AFC) as well as hoping to bring added revenue for other organizations, according to Rhett Lindsay, Director of Fundraising Events for the AFC.

"The program brings in over $200,000 net for the organization," Lindsay told ChicagoPride.com. "I expect it to be a success. It's a great opportunity for us."

Lindsay said this year more charities will participate in greater numbers, regardless of the growing population in the general public for the race. This will mean not only increased revenue for AFC, but for other charities such as Paws Chicago, the city's largest no-kill humane shelter, and others.

Even though the big race is still over six months away, AFC has urged anyone, charity-affiliated or not, to join in by logging onto www.t2ea.com, and selecting Chicago [or their city], where they will be given several options to register for upcoming 2014 races and the training benefits that come with registration.

Participants are expected to raise at least $1,700, whether charity-based or civilian, and will receive the following benefits, according to Lindsay: Guaranteed Bank of America Chicago Marathon entry with Team to End AIDS; Registration including a coach-led training program, training shirt, fundraising page and race-day support; Free Fitness Formula Clubs membership (May-October).

In addition, registrations made before the end of the lottery period, April 7, 2014, will receive a $500 fundraising credit.

AFC officials explained that this year the Chicago Marathon, which has historically brought in some 45,000 participant runners total, is giving wider latitude to charities, which should encourage more participation within that population not only for the donors who support charities such as AFC, but for the charities themselves.

"It's a completely new process; nobody else does this in this regional location. With that popularity drives popularity for the marathon and Chicago itself," said Cecilia Boyd, AFC Team Manager of the Run Programs.

"This process is actually good for charities. The city can only guarantee so many bibs [sign-ups] for the public. Before it was first-come, first-serve [for Charities] and 10,000 bibs were guaranteed. Now that number is going to be more, and this helps encourage local charities [not only for] revenue but helping get more people involved as runners in a huge event that affects the entire city."

Team to End AIDS (T2) not only supports the AFC, but was recognized as Chicago's Best Charity Training Program by Competitor Magazine in 2013 and can boast a previous-year fundraising total of over $220,000, according to information released by the AFC. Officials hope the increased charity-involvement will be beneficial to the event as a whole.

"It's another fundraising avenue for the efforts of donors and for those who benefit," said Lindsay.

The Chicago Marathon, one of the largest marathons in the world with more than 45,000 participants, is in its 37th year. The first race was held September 25, 1977, under the name Mayor Daley Marathon.