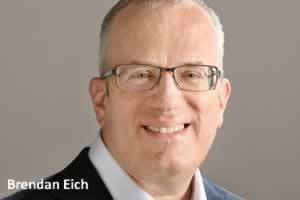 In an interview published Wednesday, Mozilla CEO Brendan Eich refused to answer where he stands on the issue of marriage equality.

Eich's ascent to CEO last week prompted a backlash over his $1,000 donation to the campaign to approve Proposition 8, California's 2008 voter-approved constitutional amendment restricting marriage to heterosexual couples. Proposition 8 stood until last year, when the Supreme Court left in place a lower court ruling knocking it down.

Multiple employees publicly asked Eich to step down and at least one developer has said it will no longer develop apps for the browser. Dating site OkCupid on Monday called on users to dump Mozilla's popular Firefox Web browser.

Over the weekend, Mozilla reiterated its support for marriage equality.

But while Eich has expressed his "sorrow at having caused pain" and pledged to reach out to the LGBT community, he's not weighed in on the subject.

"I prefer not to talk about my beliefs," Eich answered when CNET.com asked him how he felt about "gay marriage rights."

"One of the things about my principles of inclusiveness is not just that you leave it at the door, but that you don't require others to put targets on themselves by labeling their beliefs, because that will present problems and will be seen as divisive," he said.

Eich added that Mozilla "is under threat here."

"If Mozilla cannot continue to operate according to its principles of inclusiveness, where you can work on the mission no matter what your background or other beliefs, I think we'll probably fail," he added.