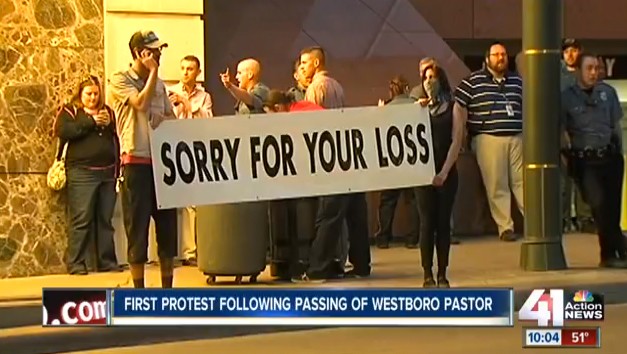 Members of the controversial hate church protested outside Lorde's concert in Kansas City, Missouri on Friday night. They were met by more than 20 counter-protesters who held up a sign that read "sorry for your loss."

According to NBC affiliate KSHB, the message of compassion was lost on Westboro member Steve Drain.

"I don't even know what they're saying," he said.

Nate Phelps, the estranged son of Phelps Sr., posted the story and image on his Facebook page with the comment, "I love the world when I see this."

Phelps Sr., a disbarred lawyer, ordained minister and founder of Westboro Baptist Church, died March 19, 2014 at a Topeka, KS. hospice after being excommunicated from the church in August of 2013.

ChicagoPride.com senior vice president of community affairs Bill Pritchard joined the Wall Street Journal News Hub to explain why, despite the church's intolerance for gay people, the LGBT community should respect his passing. (Watch the video)