Westboro Baptist Church founder, Fred Phelps is 'on the edge of death' 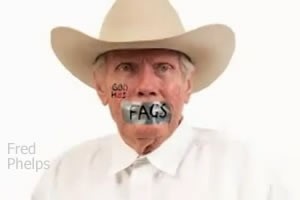 Topeka, KS - Pastor Fred Waldron Phelps Sr., the controversial anti-gay leader of Westboro Baptist Church, is "on the edge of death" and has been excommunicated from the church he founded, according to his estranged son, Nate Phelps.

"I've learned that my father, Fred Phelps, Sr., pastor of the "God Hates Fags" Westboro Baptist Church, was ex-communicated from the "church" back in August of 2013. He is now on the edge of death at Midland Hospice house in Topeka, Kansas," Phelps, who is one of five sons of Fred Phelps Sr., posted on Facebook Saturday. "I'm not sure how I feel about this. Terribly ironic that his devotion to his god ends this way. Destroyed by the monster he made."

The Topeka-based Westboro Baptist Church, is not affiliated with a larger denomination and is made up mostly of Phelps' extended family members. Phelps and his church gained national attention when they protested at the funeral of Matthew Shepard with signs that read "No Fags in Heaven" and "God Hates Fags." Phelps is also known to condemn Muslims, Roman Catholics and Jews.

Nate Phelps broke away from the hate church 37 years ago. In 2011, he offered a horrifying perspective of the controversial church and his father.

Megan Phelps-Roper and her sister Grace, the granddaughters of Fred Phelps Sr., separated from the church in November 2012 and apologized for the 'hurt' they have caused.

In 2013, Lauren Drain, former church member and the author of Banished: Surviving My Years in the Westboro Baptist Church, said Fred Phelps Sr.'s homophobia may have roots in his own sexual orientation.

Members of Westboro Baptist Church have attempted a number of protests in Chicago. In 2008, several members trying to protest outside the Center on Halsted had to retreat to a nearby police station after being countered by more than 100 people.

Phelps Sr., a disbarred lawyer and an ordained minister who started Westboro Baptist Church in 1955, is 84-years-old.