Officials aim to give Boystown a makeover with Halsted Street plan 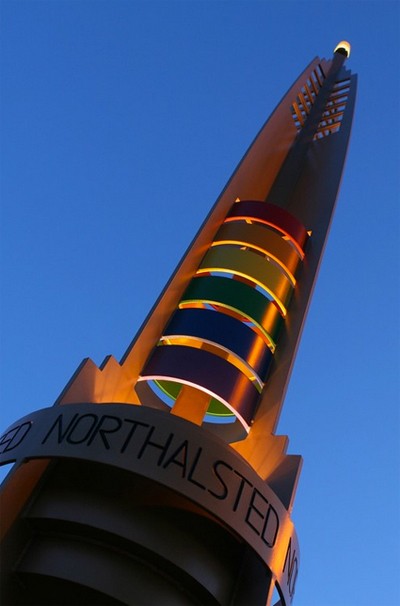 Unique lighting displays, a slew of new businesses and maybe even wider sidewalks are all being discussed as business owners look ahead to 2020.

Chicago, IL - Boystown is being eyed for a big upgrade that could include anything from a series of new restaurants to unique and innovative lighting displays as officials plan to transform North Halsted Street.

It's being dubbed the Northalsted 2020 Development Plan, a vision for what the future of the Lakeview community could look like. Organized by the Northalsted Business Alliance, the plan is gauging what neighbors and visitors think Boystown is missing, what could be improved and what could put it on the map.

"We've talked about our own transportation in the neighborhood, especially in the winter," Cannella told ChicagoPride.com. "If we had free transportation like that, it could draw more people to North Halsted.

"One of the other things we've been talking about is really lighting. The [rainbow] pylons are neat, but I think they're a little dated compared to what they could be," Cannella continued. "What if all of them from Belmont up Halsted were lit up so on a day light St. Patrick's Day they would all shoot green light into the sky? On World AIDS Day they could shine red, and during Gay Pride they could slowly change between the colors of the rainbow. When you walked into the neighborhood, you would know you were somewhere different."

The unique pylon spotlights are the committee's idea to brand the street similar to other neighborhoods in Chicago, like the Old Town gates arching over the Wells Street sidewalks. Other ideas like widening the sidewalks and adding brick pavers to make Halsted Street more pedestrian friendly are also on the group's wish list, but Cannella realizes those more grandiose ideas.

More attainable upgrades, however, might include a slew of new businesses heading to the corridor. The development committee recently sent out an online survey to community members to garner feedback on what types of improvements they would like to see on Halsted, and there was an extra influence with questions about restaurants.

Although the survey is now closed to new responses, Cannella says his team received enough information to influence business owners to flock to Halsted. Results of the survey should be compiled in the upcoming weeks.

"Restaurants are definitely what people want, and it's very important," Cannella said. "For example, Wicker Park – I was over there recently to eat and it's amazing the number of places to eat over there. Using the survey results, we can target new restaurants and say people want their business. We can go looking for a national chain or local owner and say, 'Halsted is a cool, hip place, we have an open storefront, and these people want you here.'"

The plan is expected to bolster business, create an even more unique identity for Chicago's LGBT destination, and create a neighborhood that answers the wants and needs of the people who visit most. And while Cannella says the entire plan won't be executed overnight, the Northalsted 2020 Development Plan is a step in the right direction.

"This will help us get to the next phase," he said. "We're not going to flip some switch in 2020 and turn everything on its head, but I'm a big believer in continuous improvement. I think what ideally we'd like to see is every year we add something new, and suddenly there's an evolution of the street."