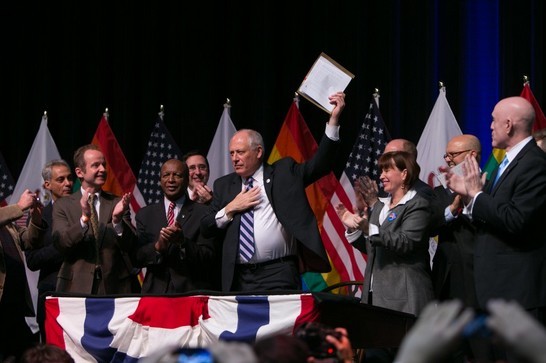 EQIL CEO Bernard Cherkasov: 'It is simply time for the other county clerks to follow suit'

Hulten's decision follows the ruling last week of U.S. District Court Judge Sharon Johnson Coleman that marriage equality is a fundamental right and denying immediate access to it is unconstitutional.

"The precise effect of the ruling on other Illinois counties is unclear. However, after consulting with State's Attorney Julia Rietz, I have come to the conclusion that the rationale of the case applies to all citizens of Illinois and that Champaign County residents should have no fewer Constitutional rights than those in Cook County," Hulten said in a released statement. "Furthermore, given the ruling, denying a license to a same sex couple would provide no benefit to the County and would likely result in litigation at taxpayer expense."

Equality Illinois applaued Hulten for his decision, and called on other county clerks to being issuing licenses.

"Clerk Hulten recognized both the humanity of helping gay and lesbian couples to fulfill their dreams and the legal soundness of following the decision of a federal court that denying marriage licenses was unconstitutional," Equality Illinois CEO Berrnard Cherkasov said in a statement.

"It is simply time for the other county clerks to follow suit," Cherkasov added. "As we saw in the immediate rush to the Cook County Clerk's marriage bureau after Friday's ruling, gay and lesbian couples are eager and ready to take the step that not only grants them and their family the legal benefits and rights of marriage but also bestows society's recognition that their love is equal."

Cherkasov noted the significance that the licenses are now available in a Central Illinois county, which is within easy driving distance of not only Champaign-Urbana but also Peoria, Decatur, Springfield, Bloomington-Normal and Danville for couples and their families.