Michael Sam's father not comfortable with football star's coming out 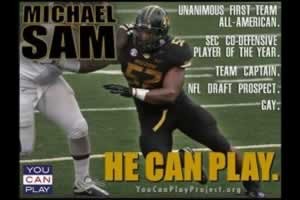 Michael Sam's father told The New York Times that he's not comfortable with his son's coming out gay.

Sam received praise from the Obamas after coming out, but his father remains skeptical.

"I don't want my grandkids raised in that kind of environment," Michael Sam Sr. told the nation's paper of record. "I'm old school.I'm a man and a woman type of guy."

"As a black man, we have so many hurdles to cross. This is just one he has to cross," he added.

In a tweet, the younger Sam thanked his family for their support: "Want to give an additional thanks to my supportive family and team."