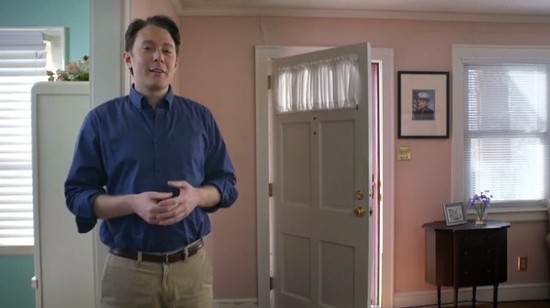 "I'm not a politician. I don't ever want to be one, but I do want to help bring back — at least to my corner of North Carolina — the idea someone can go to Washington to represent all the people, whether they voted for you or not," Aiken said.

The 35-year-old Raleigh native will run as a Democrat for North Carolina's 2nd Congressional District, which is currently held by Republican Rep. Renee Ellmers. He joins two candidates in the Democratic primary.

In the video, Aiken criticized the partisanship in Congress and attacked Ellmers for her votes on the government shutdown and funding cuts for the military and military families.

He also highlighted his personal story, including a home town apart by domestic violence.

"For most Americans, there are no golden tickets," Aiken shared. "At least not like the kind you see on TV. More families are struggling today than at any time in our history. And here in North Carolina, we've suffered more than our share of pain."

Since garnering fame on the second season of "American Idol," Aiken launched a successful music career and appeared on Broadway. In 2006, President George W. Bush appointed Aiken to a presidential commission focused on people with intellectual disabilities. Aiken came out as gay in 2008 by appearing on the cover of People magazine. He has remained a strong advocate on LGBT issues, including bullying.