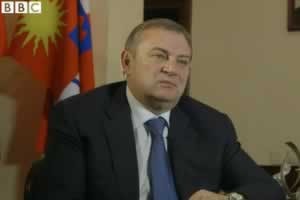 Anatoly Pakhomov, the mayor of Sochi, site of next month's Winter Olympics, says his city has no gay residents.

"We don't have them in our town," Pakhomov told the BBC.

"You sure?" the network's correspondent asked.

Next month's games are being overshadowed by Russia's new anti-gay law, which prohibits the promotion of "gay propaganda" to minors.

Pakhomov insisted that all visitors would be welcome in his city as long as they follow the law.

"Our hospitality will be extended to everyone who respects the laws of the Russian federation and who doesn't impose their habits and their will on others," he said."But yes, everyone is welcome."

"There are several gay clubs in Sochi," he said. "How they survive? Why they are not bankrupt?"