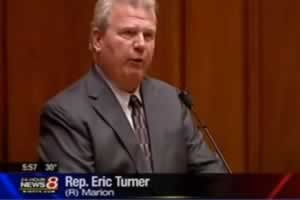 Indianapolis, IN - The Indiana House on Thursday scheduled its first hearing on a controversial amendment which seeks to prohibit the state from recognizing any union other than a heterosexual marriage.

The 13-member House Judiciary Committee will consider the measure on Monday at 10 AM.

HJR-3, formerly HJR-6, was introduced by Rep. Eric Turner, a Republican from Cicero, in 2011. It easily cleared the Republican House and Senate. However, a second vote is needed before the amendment can head to voters in November.

Some lawmakers have expressed doubts over the measure's broad language, but any changes to the resolution's language would likely result in a delay. Instead, Turner has introduced a companion bill (House Bill 1153) which states that it is not the Legislature's intent to block private employers from extending domestic partnership benefits to their gay and lesbian workers.

Freedom Indiana, the umbrella group working to derail the amendment, responded to the scheduled hearing in an e-mail to supporters.

"Make no mistake – we're under attack, and this proves it," the group said. "Lawmakers have only been in session for less than 72 hours, and already our opponents are rushing this harmful amendment through as fast as they can."

News of the hearing comes a day after supporters of the ban launched two television ads calling on lawmakers to approve the amendment.