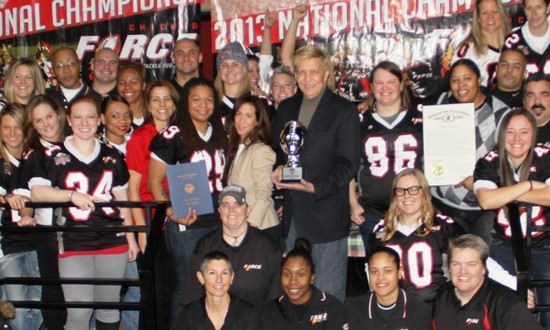 Chicago, IL - The Chicago Force celebrated its 2013 perfect season, including a national championship title, during a championship ring ceremony on Jan. 5, which was attended by city and state political dignitaries.

To honor the achievements of the team, The City of Chicago, County of Cook and the State of Illinois proclaimed Jan. 5, 2014 "Chicago Force Women's Tackle Football Day."

Chicago Ald. Bob Fioretii (2nd Ward) called the Force "Chicago's best kept secret" as he presented the resolution from the mayor and city council and congratulated the players, coaches and owners during the ceremony held at Leona's Restaurant, 1936 W. Augusta Ave.

Mica Matsoff, Senior Advisor from the Illinois Governor's Office, echoed Alderman Fioretii's comments and read from the State of Illinois Proclamation characterizing the team as a "shining example to girls and women about what they can achieve in sport and in life."

During the 2013 perfect season, the Chicago Force (12-0) out-scored their opponents 771-128 and cruised to a convincing 81-34 win over the Dallas Diamonds to win the National Championship.

The Chicago Force and the U.S. Women's National Team are subjects of a full feature documentary, The Tackle Girls, which will preview in New York City's Time Square on Jan. 30, 2014 during Super Bowl week. The film follows the U.S. Women's National Team to the World Championship and stars Chicago Force Quarterback Sami Grisafe, whose original music is also featured in the film. www.TheTackleGirls.org.

The 2014 season begins in April, and the Force will again play its home games at Evanston Township High School.