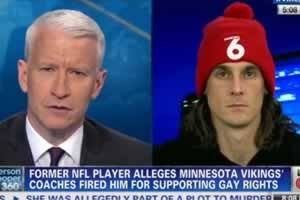 Former Minnesota Vikings punter Chris Kluwe has said that witnesses can back up his claims against Mike Priefer.

Kluwe wrote in a scathing op-ed published last week that he was fired from the team by special-teams coordinator Priefer, whom he called a "bigot," and two "cowards": then-head coach Leslie Frazier and general manager Rick Spielman.

"There are witnesses to all the things I put in that piece on Deadspin," Kluwe said. "And, you know, I made sure that I had witnesses, because otherwise that's a very easy defamation of character case. And it would be pretty easy for him to prevail in the court of law."

"I'm 100 percent confident in everything that I related as how it happened and really encouraged by the fact that the Vikings are taking it seriously and opening an independent investigation, because I think once they talk with people, they'll find out what happened."

He added that he was "confident" players would back up his account "because it's the right thing to do."