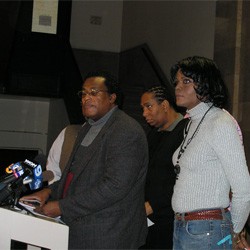 photo credit // windy city media group
Chicago, IL - Local Black LGBT activists are concerned about the recent murders of two openly gay Black men on the South Side, and in light of the passing of the anniversary of last year's New Year's Eve South Side shooting, they are calling for the city to step up on combating what they fear is a pattern of violence against the community.

"We are calling on the police department to let the community know what's going on," said the Coalition for Justice and Respect's Mark Loveless. He and others feel that the city and police haven't adequately responded to the killings.

Critical Caucus—a coalition of LGBT organizations such as the Coalition for Justice and Respect—as well as event planners and businesses, held a press conference at City Hall Dec. 27 to issue a community alert in response to the news of the murder of an openly gay choir director as well as the mid-November killing of a Black gay man. Loveless feels that the killings show a continued pattern of violence against Black gay men on the city's South Side.

Since the press conference, the Chicago Police Department has contacted Critical Caucus and requested a meeting. Loveless said that the meeting will take place early January.

"We are here because we are scared," Loveless said. Black gay activists are calling on the Chicago Police Department to provide the community with more information. They also want city officials to help stop what they consider a pattern of violence, although police have no information linking the cases, which are still under investigation. Police also have no information as to whether or not the killings were motivated by hate.

On Nov. 17, 24-year-old Larry Bland was shot to death in his Englewood home. His family has voiced concern that he was possibly targeted because he was openly gay. Donald Young, 47, was found shot to death in his South Side apartment Dec. 23, and several items from his home were stolen. He was the choir director for Trinity United Church of Christ, which recently confirmed his sexual orientation to a local news station.

Last year, six men were shot at a New Year's Eve party attended primarily by Black gay men on the South Side. The case remains unsolved.

Loveless said since the news of the killings broke, his organization has received phone calls and messages from South Side Black gays and lesbians who said they have been recently attacked. Critical Caucus encourages the community to speak out and report attacks to the police.

Local activist Wil Lockett believes it is time for the community to take action. "Black gay and lesbian people are being attacked and murdered," Lockett said. "It's time to get out on the streets and take it on publicly without embarrassment."

Regardless of whether or not the recent murders will be investigated as hate crimes, Loveless said he is most concerned over the lack of information provided to the community.

"There is a growing concern of the killing of Black gay men," Loveless said.

Critical Caucus held a march in remembrance of the one-year anniversary of the South Side shooting Dec. 31. Visit www.WindyCityMediaGroup.com to get the latest on what transpired.