Illinois gets marriage equality: A look back at 2013 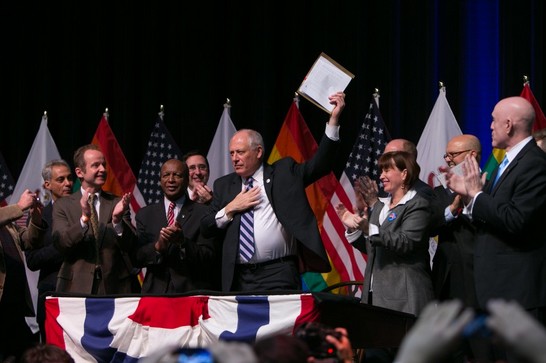 Chicago, IL - Many LGBT Illinoisans will likely remember 2013 mainly as the year marriage equality became a reality for our state. While we have to wait until June for marriage to officially wed, the marriage struggle this year gave our community numerous moments of joy, not to mention a few moments of disappointment. Here are some of ChicagoPride.com's highlights from the past year.

January: The new year brought tremendous hope to supporters when, on Jan. 4, the Religious Freedom and Marriage Fairness Act is voted out of committee and onto the Senate floor. Supporters hope that the vote would take place quickly, but a number of mix-ups mean it has to wait. Rick Garcia of The Civil Rights Agenda tells ChicagoPride.com that the anticipated Senate vote simply fell victim to bad timing, adding, "This means we are one step closer."

February: The Illinois State Senate grants a Valentine's Day wish to gay and lesbian constituents seeking legal marriage recognition—the Religious Freedom and Marriage Fairness Act passes in the chamber by a vote of 34-21. Senate sponsor Heather Steans says of the legislation, "It's time we in the General Assembly catch up to our neighbors. We can confidently and proudly vote for this bill today, because voters in the nation and our state understand and endorse this basic tenet of fairness and equality." Twelve days later, the legislation passes the House Executive Committee in a narrow 6-5 vote.

March: Chief co-sponsor Greg Harris tells Chicago Sun-Times that, "When I call this for a vote, it will pass." Throughout the Spring, marriage supporters and organizers line up high-profile help, among them Mayor Rahm Emanuel as well as retired Chicago Cubs shortstop Ernie Banks and former Chicago Bears defensive end Richard Dent. President Obama's Organizing for Action project also notifies its supporters that it will be partnering with Illinois Unites for Marriage, which is a joint project by Equality Illinois, Lambda Legal and ACLU Illinois.

Residents of areas with legislators who are on the fence about SB10 report that they're receiving robo-calls asking them to tell politicians to vote against the legislation.

April: On April 5, a coalition of about a dozen African American pastors speak in the Loop in favor of the legislation. On April 24, Illinois Attorney General Lisa Madigan pens a supportive editorial in the Chicago Tribune. "Legal arguments aside, this issue at its heart is about one of the most fundamental decisions we can make — with whom to share our lives," Madigan says. "In every community in Illinois, same-sex couples have chosen to join together and, in many instances, to raise families of their own. ... They deserve the same rights and responsibilities that civil marriage offers straight couples."

May: Other states achieving marriage equality, including Rhode Island and Minnesota, heighten the anticipation as legislators return to Springfield. Near the end of the month, advocates say that they have the needed number of votes for SB10 to pass the legislation.

"The votes are, indeed, there," Bernard Cherkasov, CEO of Equality Illinois, tells ChicagoPride.com. "And I believe the bill is going to pass, but we've received no indication yet on when the bill would be called."

But on May 31, Harris announces that the vote will not come yet. Fighting back tears, he acknowledges that some colleagues did not have the support of their constituents and asked for more time.

"I have never been sadder to accept such a request," Harris said. He promises that the issue would be re-opened in the veto session in the fall, but adds, "In the meantime, I apologize to the families who were hoping to wake up full and equal citizens."

"I have to say, when you are assured with such certainty that the votes were there for a vote, and then to have one not even take place, was maddening," Lambda Legal's Midwest Regional Director James Bennett tells ChicagoPride.com. "[Politicians] should not be able to hide behind not having a vote."

In a statement, Gay Liberation Network's Andy Thayer calls the failure "abject betrayal" and lays blame at the feet of House Speaker Michael Madigan. "Anyone who knows anything about Illinois politics knows that Speaker Mike Madigan owns the House–if he had insisted on a positive vote from his caucus, it would have passed."

June: Nearly 100 people turn out in the rain for a protest organized by GLN and TCRA at the corner of Roscoe and Halsted. Members of the coalition promise that the struggle will take a more active role in decision-making.

"The top donor to the Democratic party hired all of these contract lobbyist, straight white men, who don't know shit," Rick Garcia tells the crowd of about 100 people.

Following a controversial editorial in Windy City Times, publisher Tracy Baim and Harris issue a joint statement: "We as a community can work together for the common cause of marriage equality, even if we have differences of opinion on strategy and tactics. We both have a respect for the role that each aspect of the community plays, including elected officials, activists, donors and the media. ... We must unite fiercely as a community and focus our efforts on carrying the beacon of hope and equality for all families, and against those who wish to defeat the full promise of America for all her peoples."

In mid-June, Illinois Unites for Marriage says that it is hiring a full-time campaign manager who would oversee and coordinate the statewide advocacy campaign and would gather additional input from supporters during nine community meetings held over the summer.

July: Illinois Unites hires John Kohlhepp, a union organizer with AFSCME, to be their campaign manager. Keron Blair of Midwest Academy is hired as field director, and Rev. Benjamin Reynolds is to be the coalition's faith director. The coalition also announces a goal of raising $2 million.

August: Chicago-based Groupon becomes the latest corporation to come out in support of marriage equality in Illinois, with a YouTube video that announces, "We are Groupon and we are proud of being part of a diverse community of customers, merchants and employees. We work better when everyone, including our LGBT co-workers, can bring their whole selves to work every day. That is why we support marriage equality."

Pat Brady, the former chairman of the state Republican Party, announces that he is joining the American Civil Liberties Union of Illinois to lobby for the passage of same-sex marriage legislation in Illinois. "Liberty, freedom and equality under the law are all things that Republicans and conservatives have believed in for a long, long time," Brady tells WBEZ radio.

September: Minneapolis Mayor R.T. Rybak visits Center on Halsted to unveil a new digital and print campaign designed to draw same-sex couples from Chicago to Minneapolis where they can get legally married. "The people who built this neighborhood, who have done so much incredible work for this community, you deserve equal rights," said Ryback. "Come to Minnesota, a place that already recognizes that you should have those rights." Anthony Martinez, executive director of The Civil Rights Agenda, additionally cites a recent study by the Williams Institute at the University of California, Los Angeles, estimating marriage equality could add $100 million to Illinois' economy.

October: Thousands of marriage rights advocates and allies brave the cold rain to rally outside the Capitol as part of the March on Springfield for Marriage Equality, an event to mark the first day of the fall veto session.

"This is our hour, this is our moment," Gov. Quinn tells the record-breaking crowd. "We need love to sign a marriage equality law and I'll sign it as quickly as possible." Other top state officials in the rally include Sen. Dick Durbin (D-Chicago), Lt. Governor Sheila Simon (D), Illinois Attorney General Lisa Madigan (D) and Illinois Comptroller Judy Baar Topinka (R).

Throughout the afternoon, in what becomes a three-hour rally, the politicians and speakers share the stage with top LGBT musicians, including Steve Grand, Sami Grisafe and Stephen Leonard.

November: As equality supporters settle in for a three-day stretch of the veto session—many not expecting a vote until the last possible minute—Harris and colleagues surprise most with a vote that's one of the first items on the House agenda. They approve the bill on Nov. 5 by a vote of 61-54-2.

"At the end of the day, this bill is about love. It's about family. It's about commitment," Harris tells colleagues on the floor.

Among those speaking on the legislation's behalf is House Speaker Madigan, who sat next to former state Rep. (and current alderman) Deb Mell during the debate.

House Minority Leader Tom Cross (R-Oswego) was one of three Republicans in the House to vote for in favor of the bill. The others were Ron Sandack (R-Downers Grove) and Ed Sullivan (R-Mundelein).

On Nov. 20, with the stroke of Gov. Pat Quinn's pen, Illinois becomes the 16th state in the country to allow full marriage equality. SB10 is signed in front of numerous elected officials, advocates and members of the public at the UIC Forum in Chicago.

"There is no straight or gay marriage. From now on there is only marriage in Illinois," said Mayor Rahm Emanuel.

For some Illinois couples, the passage is initially a bittersweet victory however. The official start date of gay marriages, thanks to rules applying to the veto session, is June 1. For couples with partners facing serious illnesses, there is no assurance that seven months would afford enough time. But a judge rules that activist Vernita Gray, who is seriously ill, and her partner Patricia Ewert can wed early. The day before Thanksgiving, they become the first same-sex couple to be legally married within Illinois.

December: A federal judge rules that two more couples with terminally ill partners can marry before the June 1 start-date. Additionally, the judge rules that the Cook County Clerk's Office can set up a streamlined process for couples facing similar circumstances. The ruling initially only applies to Cook County, where issuance of a marriage license is dependent on the completion of a physician's certification form that can be downloaded on the marriage equality page of the clerk's website.

"We thank the Court and the clerk's office for their swift response to ensure that Illinois couples who are struggling with the challenges of a life-threatening illness will have a chance to be married," says Camilla Taylor of Lambda Legal.