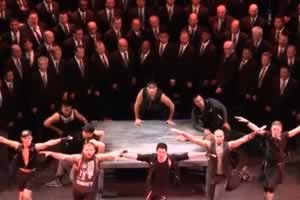 Los Angeles, CA - The Gay Men's Chorus of Los Angeles (GMCLA) delivered an early Christmas present to all in releasing video of its rendition of The 12 Days of Christmas, performed last week during its sold out Holiday Spectacular: Festival of Carols held at the Alex Theater on December 14th and 15th.

"You'll never hear The Twelve Day of Christmas the same way again!" the chorus wrote in a Facebook post. "The Gay Men's Chorus of Los Angeles puts its inimitable stamp on a holiday classic."

Titled The 12 Rockin' Days of Christmas, GMCLA's tres gay interpretation of this holiday classic is here: