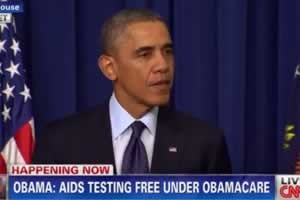 "Thanks to the Affordable Care Act millions of insured Americans will be able to get tested free of charge," Obama said. "Americans will now have access to affordable health care coverage. And beginning in January, no American will be again denied health insurance because of their HIV status."

The president's complete remarks are below:

"I should say, actually, welcome back, because many of you have joined us before as we've marked new milestones in our fight against HIV and AIDS. And I'm honored that you could join us in commemorating World AIDS Day, which was yesterday. And this is a time for remembering the friends and loved ones that we've lost, celebrating the extraordinary progress – thanks to some people in this room – that we've been able to make, and most importantly, recommitting ourselves to the mission that we share, which is achieving an AIDS-free generation."

"I especially want to welcome ministers from our partner countries; members of my administration, including Secretary Sebelius, Secretary John Kerry; Congresswoman Barbara Lee; Mark Dybul from the Global Fund to Fight AIDS, Tuberculosis and Malaria. And we've also got here Francis Collins from the National Institutes of Health; Michel Sidibe from UN-AIDS; Deborah von Zinkernagel, who's carrying on the great work of Eric Goosby as our Acting Global AIDS Coordinator; and our many friends from the philanthropic world, including Bill Gates. So thank you all for joining us here today."

"Every year, this is a moment to reflect on how far we've come since the early days of the AIDS epidemic. And those of you who lived through it remember all too well the fear and the stigma, and how hard people with HIV had to fight to be seen, or heard, or to be treated with basic compassion.And you remember how little we knew about how to prevent AIDS, or how to treat it. What we did know was the devastation that it inflicted -- striking down vibrant men and women in the prime of their lives and spreading from city to city and country to country seemingly overnight."

"Today, that picture is transformed.Thanks to the courage and love of so many of you in this room and around the world, awareness has soared; research has surged.Prevention, treatment and care are now saving millions of lives not only in the world's richest countries but in some of the world's poorest countries as well. And for many, with testing and access to the right treatment, the disease that was once a death sentence now comes with a good chance at a healthy and productive life. And that's an extraordinary achievement."

"As President, I've told you that in this fight, you'll have a partner in me. And I said that if the United States wanted to be the global leader in combating this disease, then we needed to act like it -- by doing our part and by leading the world to do more together. And that's what we've done, in partnership with so many of you. We created the first comprehensive National HIV/AIDS Strategy, rooted in a simple vision that every person should get access to life-extending care, regardless of age or gender, race or ethnicity, sexual orientation, gender identity or socio-economic status."

"We've continued to support the Ryan White CARE Act to help underserved communities, and we lifted the entry ban so that people with HIV are no longer barred from the United States – which led to the International AIDS Conference being held here last year for the very first time in over 20 years."

"This summer, I issued an executive order creating the HIV Care Continuum Initiative to boost our federal efforts to prevent and treat HIV. Last month, I signed the HIV Organ Policy Equity Act, to finally allow research into organ donations between people with HIV – a step achieved with bipartisan support."

"And thanks to the Affordable Care Act, millions of insured Americans will be able to get tested free of charge. Americans who were uninsured will now be able to have access to affordable health care coverage, and beginning in January, no American will be again denied health insurance because of their HIV status."

"On World AIDS Day two years ago, I announced an additional $35 million for the AIDS Drug Assistance Program, which helps people pay for lifesaving medications. At one time, the need was so great that over 9,000 people were on the waitlist. We vowed to get those numbers down. And I'm proud to announce that, as of last week, we have cleared that waitlist. We are down to zero. And we're going to keep working to keep it down."

"So we're making progress. But we're all here today because we know how much work remains to be done. Here in the United States, we need to keep focusing on investments to communities that are still being hit hardest, including gay and bisexual men, African Americans and Latinos. We need to keep up the fight in our cities – including Washington, D.C., which in recent years has reduced diagnosed infections by nearly half."

"And we're going to keep pursuing scientific breakthroughs. Today I'm pleased to announce a new initiative at the National Institutes of Health to advance research into an HIV cure. We're going to redirect $100 million into this project to develop a new generation of therapies. Because the United States should be at the forefront of new discoveries into how to put HIV into long-term remission without requiring lifelong therapies – or, better yet, eliminate it completely."

"And of course, this fight extends far beyond our borders. When I became President, I inherited President Bush's phenomenal program, PEPFAR, which has helped millions around the world receive lifesaving treatment. And we haven't just sustained those efforts, we've expanded them – reaching and serving even more people, especially mothers and children. Earlier this year, PEPFAR reached a wonderful milestone – the one millionth baby born without HIV. And that alongside the rapid decline in new HIV infections and deaths from AIDS in sub-Saharan Africa."

"On my visit to South Africa this year, I visited a clinic run by Bishop Desmond Tutu and had the honor of spending time with some of their extraordinary young patients and counselors and outreach workers and doctors. Every day, they are doing extraordinary work. And when you visit this facility, you cannot help but be inspired by what they do each and every day, in part thanks to the support of the United States of America. They're saving lives and they're changing the way their country, and the world, approaches this disease. And that's work that we have to continue to advance."

"On World AIDS Day two years ago, I set new prevention and treatment targets for PEPFAR, like increasing the number of mothers we reach so that we prevent their children from becoming infected, and helping 6 million people get treatment by the end of 2013. Today, I'm proud to announce that we've not only reached our goal, we've exceeded our treatment target. So we've helped 6.7 million people receive lifesaving treatment. And we're going to keep at it. Which is why, after I leave here today, I'll be proud to sign the PEPFAR Stewardship and Oversight Act, to keep this program going strong. Count on the legislator to applaud legislation."

"Looking ahead, it's time for the world to come together to set new goals. Right now we're working hard to get a permanent leader in place at PEPFAR, and once we do, one of our first items of business will be convening a meeting early next year, so the United States and our partners worldwide – including governments, the Global Fund, U.N.-AIDS, and civil society – can sit around one table and develop joint HIV prevention and treatment goals for the countries where we and the Global Fund do business. We'll hold each other accountable, and we'll continue to work to turn the tide of this epidemic together."

"And that includes keeping up our support for the Global Fund. Its success speaks for itself. It's helping over 6 million people in over 140 countries receive antiretroviral therapy. And now it's time to replenish the Fund.The United States will contribute $1 for every $2 pledged by other donors over the next three years, up to $5 billion total from the United States. And the United Kingdom has made a similar promise."

"So today I want to urge all those who are attending the Global Fund's replenishment meetings both today and tomorrow to take up this commitment. Don't leave our money on the table. It's been inspiring to see the countries most affected by this disease vastly increase their own contributions to this fight – in some cases, providing more than donor countries do.And that ought to inspire all of us to give more, to do more, so we can save more lives."

"After all, none of the progress we've made against AIDS could have been achieved by a single government or foundation or corporation working alone. It's the result of countless people – including so many of you – working together from countries large and small, philanthropies, universities, media, civil society, activists. More than anything, I think it's thanks to the courageous people living with HIV around the world who've shared their stories; you've lent your strength, demanded your dignity be recognized, and led the fight to spare others the anguish of this disease."

"We can't change the past or undo its wrenching pain. But what we can do – and what we have to do – is to chart a different future, guided by our love for those we couldn't save. That allows us to do everything we can, everything in our power to save those that we can. And that's my commitment to you as President."

"The United States of America will remain the global leader in the fight against HIV and AIDS. We will stand with you every step of this journey until we reach the day that we know is possible, when all men and women can protect themselves from infection; a day when all people with HIV have access to the treatments that extend their lives; the day when there are no babies being born with HIV or AIDS, and when we achieve, at long last, what was once hard to imagine – and that's an AIDS-free generation."

"That's the world I want for my daughters. That's the world that all of us want for our families.And if we stay focused, if we keep fighting, and if we honor the memory of those that we've lost, if we summon the same courage that they displayed, by insisting on whatever it takes, however long it takes, I believe we're going to win this fight. And I'm confident that we'll do so together."

"So thank you very much for your extraordinary efforts. Appreciate it. God bless you. Thank you."