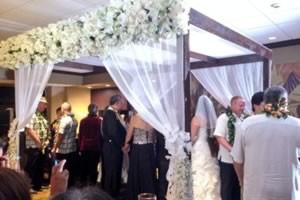 Couples began marrying soon after 12:01 AM.

Six couples married during a midnight ceremony at the Sheraton Waikiki Hotel in Honolulu, including three of the couples who first legalized their relationships in civil unions in 2012.

"It's just exciting and historic and we wanted to be a part of it," Maria Gallo, who married her partner Beth Creary, told the AP. "This is like a confirmation with a group of people here who are sharing our joy."

The law caps off a decades-long struggle for marriage rights that started in the early 90s.

In 1993, the Hawaii Supreme Court ruled it discriminatory to withhold marriage from gay couples but did not impose a remedy. Instead, lawmakers approved a law banning same-sex marriage after voters put in place a constitutional amendment that gave legislators the right to decide the issue.

The landmark opinion is credited with fueling the nationwide movement for marriage equality and prompting Congress to pass the Defense of Marriage Act in 1996. The portion of the law that prohibits the federal government from recognizing the legal marriages of gay couples was struck down in June by the U.S. Supreme Court.

Couples wishing to marry in Hawaii were able to begin the process online at 12:01 AM.

According to one estimate, the law will provide the Hawaii economy with a $217 million boost over the next three years.

A recently-approved marriage law in Illinois takes effect in June.