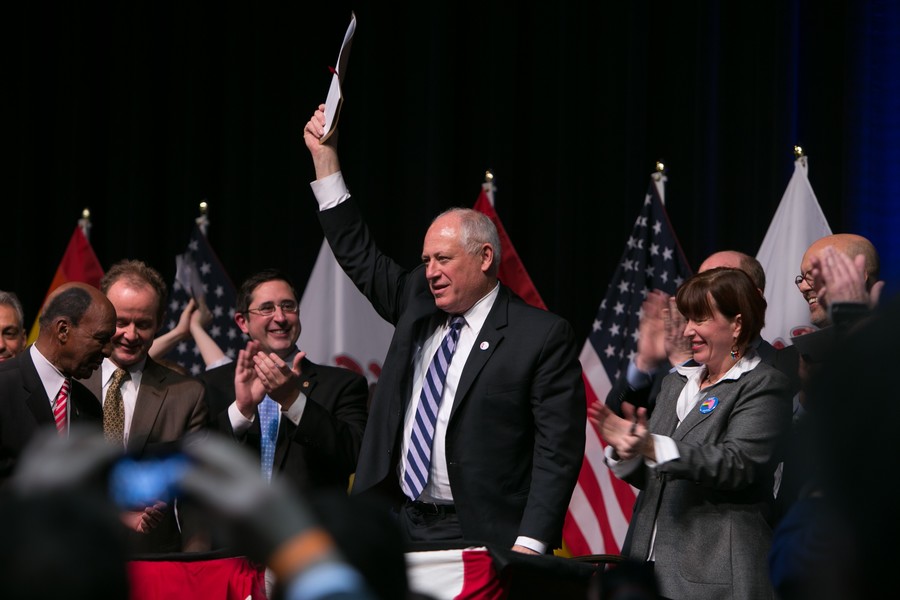 Chicago, IL - With the stroke of a pen Wednesday afternoon, Illinois becomes the 16th state in the country to allow full marriage equality.

Joined by numerous elected officials, advocates and members of the public, Illinois Gov. Pat Quinn signed Senate Bill 10, The Religious Freedom and Marriage Fairness Act, at about 4:30 p.m. during an historic signing ceremony at the UIC Forum in Chicago.

"Love never fails and I'm going to sign this bill now," said Quinn, who signed the bill - with multiple pens - on the desk Abraham Lincoln used to write his 1861 inaugural address. The desk was transported from Springfield to Chicago on Wednesday morning.

"There is no straight or gay marriage. From now on there is only marriage in Illinois," said Mayor Emanuel.

Topinka, a Republican, offered praise for the legislators who voted for the measure, singling out Harris, who received multiple standing ovations for driving the bill through the House.

"History will show we got it right on this one," said Topinka.

"I am a proud Illinoisan today," Simon told the crowd. "It's time to stop planning rallies and time to start planning weddings."

"It has been a long and bumpy road getting to this place," said Steans, who sponsored the bill in the Senate.

Of Harris, the chief architect behind the bill, Quinn called him a "great leader of democracy."

The Illinois General Assembly passed Senate Bill 10 on Nov. 5. Illinois would have been the 15th state, but Hawaii passed marriage equality legislation last week that was immediately signed into law, with a Dec. 2 effective date. Illinois' marriage equality law will go into effect June 1, 2014.

"I can tell you that passing it was a lot better than waiting," Harris told ChicagoPride.com about the long process for passage in the Illinois House. "I can also tell you that I read a really interesting quote from President Lincoln that said, 'Sometimes I walk slowly, but I never walk backward.'"

Nearly 3,000 people - a capacity crowd - packed the UIC Forum on Wednesday for the ceremony that lasted just over an hour. In 2010, more than 1,000 attended the civil union bill-signing at the Chicago Cultural Center.

"What an amazing moment this is for thousands of families," Equality Illinois CEO Bernard Cherkasov told ChicagoPride.com. "This amazing celebratory day belongs to everyone."