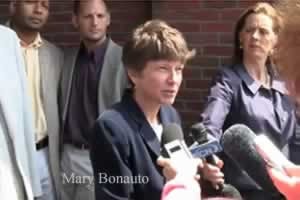 Boston, MA - Massachusetts on Monday will celebrate the tenth anniversary of the landmark ruling which legalized marriage equality in the commonwealth.

The Supreme Judicial Court on November 18, 2003 for the first time in U.S. history declared a ban on gay marriages unconstitutional.

Despite attempts from opponents, including then-Governor Mitt Romney, to reverse the ruling or contain the spread of same-sex marriage beyond the state's borders, 15 other states plus the District of Columbia have followed, 7 states in 2013 alone.

Mary Bonauto, civil rights project director at Gay & Lesbian Advocates & Defenders (GLAD), was the lead attorney in the lawsuit which struck down the prohibition.

"With more same-sex marriages, you saw more people changing their minds," Bonauto told the AP. "Seeing gay people with their extended families, seeing the commitment, that's what has turned this around."

Two states, New Mexico and Oregon, are expected to move into the marriage equality column within the next 12 months, after which voter-approved bans are expected to slow momentum.

June's historic Supreme Court decision which led the federal government to recognize the legal marriages of gay couples is being used to counter those bans. Of the nearly two dozen lawsuits filed challenging the bans, most cite the court's criticism of the Defense of Marriage Act (DOMA).

Opponents are already talking up next year's expected slow down and framing it as a reversal of fortunes.

"Same-sex marriage represents a classic conflict with religious freedom," said Mathew Staver, founder and chairman of the Christian conservative legal group Liberty Counsel. "I think there will come a tipping point where the pendulum will swing the other way as people begin to see the impact of same-sex marriage."