Donations pour in for gay waitress stiffed on tip over 'lifestyle' 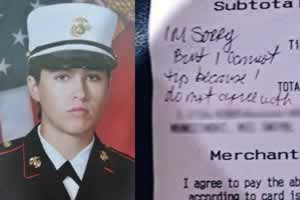 The lesbian server in New Jersey who got stiffed on a tip because of her "lifestyle" has collected nearly $2,000 in donations since her story went viral.

Dayna Morales, a server at Gallop Asian Bistro in Bridgewater, received a critical note instead of the customary 20 percent tip on a nearly $100 meal from a family of four.

"Sorry I cannot tip because I do not agree with your lifestyle & the way you live your life," the patron wrote on her credit card receipt.

Morales, who served in the Marine Corps for two years, wrote about her experience in an email to the blog Have A Gay Day. The response was overwhelming.

She told CNN that she is gay but "never discussed with them [the family] anything; it was their pure assumption."

"It's disrespectful and it's hurtful," she said. "I feel bad for their children because that's how they are going to be raised."

Morales said she planned on donating her tips to the Wounded Warrior Project. The restaurant said it would match the money and give it to a local LGBT non-profit.

"It wasn't for the money. I never planned on this. I just wanted to vent. The purpose was to inform people it wasn't OK," she added.

(Related: Patrons refuse to tip server because being a "fag" is an affront to God.)