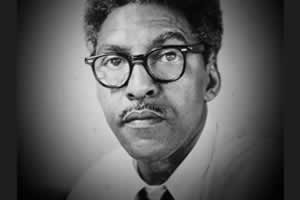 Ride and Rustin are among the 16 people the president will recognize with the highest honor the nation can bestow on a civilian.

Ride, the first American woman in space, passed away last July at the age of 61 after losing a prolonged 17-month battle with pancreatic cancer. She also held the distinction of being the youngest American in space and the first lesbian, though she never spoke about her private life in public.

Rustin was a leading activist of the early civil rights movement. He helped initiate a 1947 Freedom Ride challenging racial segregation on interstate buses and was the main organizer of the 1963 March on Washington for Jobs and Freedom. He was also gay.

"His role in the fight for civil rights of African-Americans is all the more admirable because he made it as a gay man, experiencing prejudice not just because of his race, but because of his sexual orientation as well," Griffin said.