Road to Springfield: 'Why we march' 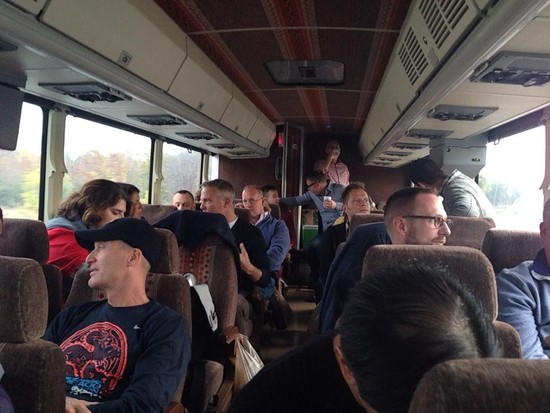 aboard a chartered bus to springfield

Waymon Hudson reports from the road to Springfield

Chicago, IL - With the March on Springfield for Marriage Equality set to kick off this afternoon, thousands of Illinoisans are this morning en route to the State Capitol.

Many participants are driving, some are taking Amtrak trains and others boarded chartered buses early this morning. Among those riding on a packed bus of supporters is ChicagoPride.com political editor Waymon Hudson.

Hudson reports his bus is filled with Chicagoans of every age, gender, sexual orientation, and race.

"There is an air of excitement and determination as riders talk amongst themselves and tell their stories of why this march and day of activism means so much to them," said Hudson.

As part of the three-and-a-half hour trip, Hudson surveyed passengers to see why they are participating in the march.

Ruth Giles Ott: "This is important to me, even as a straight soccer mom. As I saw my gay friends travel to marry or settle for civil unions, the inequality was galling to me. So I had to march and be involved."

Adam Roker: "To not be a part of this would be to ignore the changing history in our time. To not have a voice in our future would be not doing your part."

Stacy Gorgas: "This is our stonewall, our chance for to set up equality for future generations. People have fought before us to bring us to this point and now it's our time to take a stand for our rights."

Anthony Niedwiecki: "I'm marching because equality can't wait. I've been with my husband for 11 years and it's time the state I live in recognizes our love and commitment."

Mark Reeves: "After more than 2 decades with my partner, I wanted to represent us even though he isn't able to march. It's time to make him an honest man. As I'm getting older, marriage is very important to me. I want our relationship to be equal to everyone else's and we want to be treated like everyone else." (Partner Frank Chavez)

Mindy Verson: "I want to get married, I want my civil rights. I'm in a civil union, but I want to be equal."

Eric Casper: "It's simple to me -- it's time to be treated like everyone else. It's about equality."

Jarod Cunningham: "As a young person, I want to one day be able to marry in the state I live in --when I meet the right person."

Jim Gosse: "My husband and I became bus captains because we've been together 16 years and want to get married here -- where it counts for us."

Join the conversation and tell Waymon why you are marching. #whywemarch #il4m