Buses depart for March on Springfield for Marriage Equality 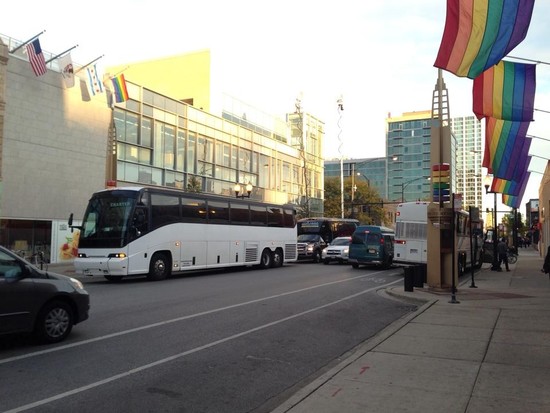 Marriage equality rally kicks off with Rock the March at Noon

Chicago, IL - Illinoisans are driving, taking Amtrak trains and boarding chartered buses this morning as they head to the State Capitol for the March on Springfield for Marriage Equality, an event that marks the first day of the fall veto session.

Over 55 chartered buses organized by a number of supportive groups, including Equality Illinois, departed from North Side and South Side locations in Chicago around 7:30 a.m.

Illinois Gov. Pat Quinn (D) and Sen. Dick Durbin (D-Chicago) will kick off the 90 minute rally at 1 p.m. when a diverse group of lesbian, bisexual, gay & transgender (LGBT) activists and organizers will speak.

"My message will capitalize on civil and human rights and in being in the Land of Lincoln, who is celebrated by particularly African-Americans for signing the Emancipation Proclamation, which gave African slaves freedom, something many African-American preachers are refusing to do for one of the most marginalized people groups in modern society," he told ChicagoPride.com.

"We're rocking this march to get the blood pumping -- we need high energy right now to help push this debate of marriage equality into action so that it becomes our reality," Leonard told ChicagoPride.com.

At the rally's conclusion, Illinois families will lead the attendees on a march around the State Capitol.

Tuesday's rally is to call action on The Religious Freedom and Marriage Fairness Act (SB-10), which cleared the Illinois Senate on Feb. 14, but stalled in the House on May 31.

After the House failed to vote on the measure, Windy City Times co-founder and publisher Tracy Baim reached out to 12 other individuals to become co-chairs and built support amongst LGBT and allied organizations to help organize the march.

"We have built a great team working on this March," Baim told ChicagoPride.com. "This was truly a statewide effort to March on Springfield -- something that has never been done before for LGBT rights."

Baim anticipates over 4,000 people will turn out for the march despite the inclement weather.

Lawmakers face a number of decisions in the annual two-week veto session, including the state's unsolved pension crisis. State Rep. Greg Harris, chief sponsor of the marriage equality measure, has been unwilling to commit to a vote in the House, which could push a marriage vote to 2014.

Equality opponents are scheduled to rally on Oct. 23 at the Capitol.