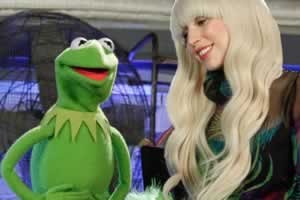 ABC on Thursday announced that the Lady Gaga & The Muppets' Holiday Spectacular will air on November 28 (Thanksgiving) at 9:30 PM Eastern Time.

"I was so excited when ABC called me about doing a holiday special this year," Lady Gaga said in a press release. "I knew it just wouldn't be a complete night of laughter and memories without the Muppets!"

"Can't wait to see the gang again, and I hope Miss Piggy's still not mad about Kermit. We're just friends!"

Lady Gaga will perform songs from her new album ARTPOP, including duets with RuPaul and Muppets.Sir Elton John and Joseph Gordon-Levitt will also have duets with Muppets.

"What an incredible opportunity!" Kermit the Frog said. "We have a long history with Ms. Gaga, so we jumped at the chance to do a holiday special with her. We won't even mind if she mistakes some of the Muppets for pieces of her wardrobe – again."

Also appearing in the special is Kristen Bell.